A brief journey around unadopted roads in Wales

When buying a house you don’t expect to have to maintain the road outside yourself do you? That’s the council’s job? Generally that’s true, but some property owners find they’re responsible for the road serving their property, even though it’s a public highway.

That’s because they live on an ‘unadopted road’.

As both media reports and Members’ postbags show, this can cause significant hardship for residents. A report commissioned by the Welsh Government found the impact extended beyond the cost of maintenance or management fees.  Rubbish, including fly tipping, vermin, bin collection etc., was the biggest concern, with the health and safety of vulnerable residents as well as access for emergency service vehicles also highlighted.

What is an ‘unadopted road’?

Highways are roads, paths etc. which the public has a right to use freely, without the need for permission. In most cases these are publicly maintained and improved by the local authority or the Welsh Government as statutory ‘highway authority’.  These are known as ‘highways maintainable at public expense’.

Local authorities are required to maintain a list of these for their area which is available to check.

However, a significant minority of property owners find their road is not maintainable at public expense. They are responsible for these unadopted roads as owners of property fronting onto the road – referred to as ‘frontagers’ in the Highways Act 1980 (the 1980 Act).

For many years we didn’t have accurate data on unadopted roads.  A 1972 Department for Transport survey, often quoted since, found approximately 40,000 unadopted roads in England and Wales, making up some 4,000 road miles.  However, Welsh Government estimates suggest the number is now far higher.

How many are there and what type of roads are involved?

In 2018 the Welsh Government established a taskforce to consider the issue. Its final report found unadopted roads fell into six main categories:

To understand the scale of the issue in Wales, the taskforce commissioned a mapping exercise from Geoplace.  This found a total of 25,374 km of unadopted roads in Wales, 5,557 km serving two or more properties, and 2,617 km five or more. 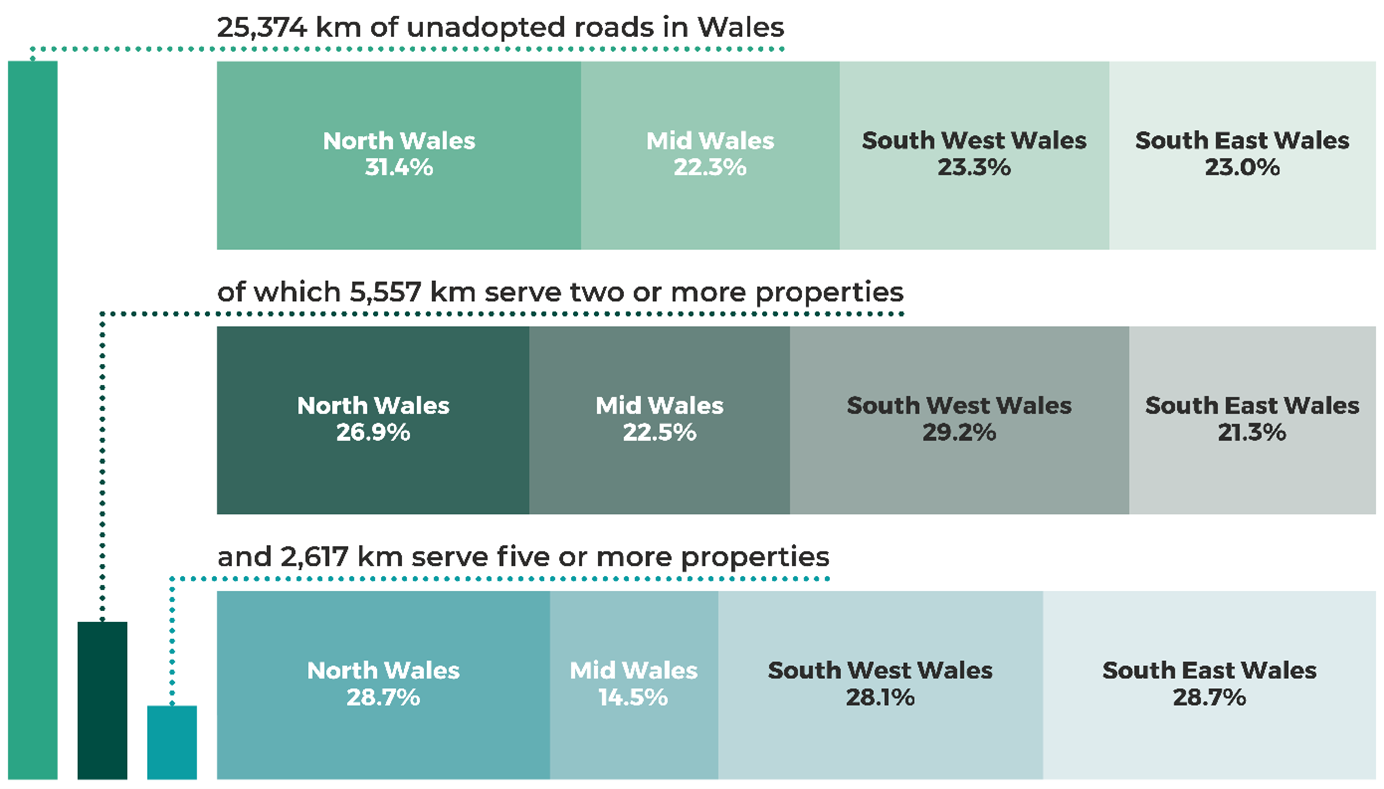 The legal position on unadopted roads is complex.

The law on ‘making up of private streets’ is largely set out in Part XI of the 1980 Act.  In summary, Part XI allows (but doesn’t require) a local authority to do work to bring the road up to adoptable standard. It will then either recoup the costs of doing so from the frontagers, using what is known as the Private Street Works Code (PSWC), and/or using money paid in advance by a developer under what is known as the Advance Payments Code (APC).

Local authorities can require frontagers to undertake urgent repairs to an unadopted road where they are required to “obviate danger to traffic in a private street” (section 230).  Where this is not done, the local authority can undertake the work with costs apportioned between the frontagers.

A significant number unadopted roads are estate roads, often the result of new developments where the estate road has not been adopted.  The 1980 Act provides for this through the APC, where a developer is required to lodge funds with the local authority to cover the cost of making up the road.

The 1980 Act also provides for ‘section 38 agreements’ between developer and local authority that the road will be constructed to an adoptable standard, and will then be adopted.

A range of issues can affect how effective these tools are, including the timescales around the local authority issuing notice under the APC, as well as factors like the liquidation of the developer.

A comprehensive summary of the law is annexed to the initial 2019 report of the Welsh Government taskforce. The House of Commons Library has also published a detailed research briefing on the issue.

So what has the Welsh Government done about this?

The preliminary and final reports of the taskforce made a number of recommendations including:

The then Minister’s October 2020 statement accepted all the recommendations.

Cutting to the chase, in terms of public funding to make up and adopt these roads the report concluded:

… an emerging recommendation is that Welsh Government in principle set aside funding to address the worst unadopted roads throughout Wales, and that highway authorities provide details as to how they would use any funding and articulate the benefits of such an investment.

Yet it also found cost made wholesale adoption impossible:

The unadopted roads infrastructure is extensive, and it is inconceivable to consider improvements to every individual section. However, based on the £600 / linear metre cost, then a £10 million pound investment will improve approximately 16 kilometres of road.

So no blank cheque, but some hope for frontagers and in his statement the then Minister committed to pilot financial support.

Although no statement was made announcing this pilot – most likely due to the Senedd election – Senedd Research requested information from the Welsh Government. The response indicated that a total of £1.4 million was allocated to six local authorities.

The Welsh Government confirmed to Senedd Research in May this year that the WLGA is currently drafting a comprehensive report on the pilots, setting out what worked, areas for improvement and making recommendations for Ministers.  Many property owners faced with the responsibility for maintaining their road will hope this will provide a route out of their difficulties.