On 24 September the Assembly’s Finance Committee published its report into the replacement of EU funding streams after Brexit. With Wales receiving £680 million per year from a range of EU funding streams, the Committee highlighted that securing suitable replacement funding is vital for Wales. Its report makes a cross-party case for continued future funding for Wales, with the key issues summarised in the video below.

In an interview by BBC Wales on 30 September, the Prime Minister, Rt Hon Theresa May MP, was asked about the level of funding and devolution of the UK-wide Shared Prosperity Fund that Wales could expect after Brexit. In relation to whether Wales would receive as much funding as it currently does through EU Structural Funds, she said that:

The point of the shared prosperity fund is that we will be looking at issues of disparities between the nations of the UK - disparities within nations and regions and deciding expenditure of money so that we are ensuring that money is being spent as effectively as possible to deliver for people.

The Prime Minister was also asked about the level of control of the UK-wide Shared Prosperity Fund that the Welsh Government would have. She highlighted that a lot of discussion is taking place about how the fund will be structured, commenting that:

The current round of EU funding runs until 2020, however the UK is scheduled to leave the EU on 29 March 2019. The Financial Settlement that forms part of the draft Withdrawal Agreement agreed between the UK and EU states that the UK will take part in all EU funded programmes until December 2020, subject to a final negotiated agreement. In the event of the UK exiting the EU under a ‘no deal scenario’, the UK Government has said that it will guarantee EU funding awarded to organisations until the end of 2020.

Wales currently receives EU funding from a number of sources. The main two are Structural Funds which aim to address poverty and reduce regional disparities; and through the Common Agricultural Policy (CAP). CAP funding comes in two elements - direct payments to farmers; and the Rural Development Programme. Wales also receives funding from a number of other sources including research and innovation funding through Horizon 2020; Creative Europe; and the European Maritime and Fisheries Fund. 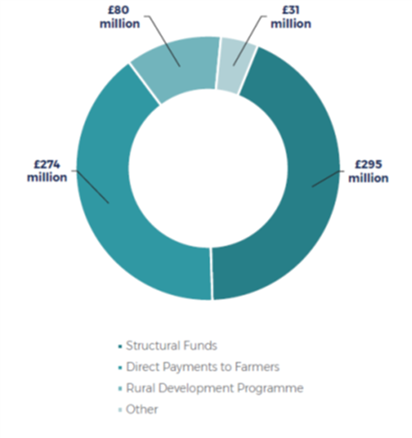 In particular, Wales has received considerably more Structural Funds than the other devolved nations and English regions. This is largely due to the West Wales and the Valleys region having the lowest Gross Domestic Product (GDP) per head of any part of the UK, at 68% of the EU average compared to 611% for Inner London West. The UK has the largest regional economic disparity in GDP per person of any of the 28 EU Member States. Consequently, over the current 2014-20 round of Structural Funds, Wales will receive over four and a half times as much Structural Funds per person than the UK average.

Figure 2: Structural Funds per person received by devolved nations and English regions over the 2014-20 period

The UK Government has proposed a UK-wide Shared Prosperity Fund to replace Structural Funds. To date there is little detail on how this might operate, however it is expected by the Welsh European Funding Office that proposals will be consulted on around the time of the UK Government’s Autumn Statement 2018.

The UK Government introduced its Agriculture Bill earlier this month to authorise new expenditure to provide support for the land management sector once the CAP comes to an end. It also allows for payments to be made during a transition period following the UK’s departure from the EU.

The Bill contains provisions that, when they become law, will provide time-limited powers for the Welsh Government to carry on making payments and introduce new schemes until it introduces its own legislation. The Welsh Government intends to introduce an Agriculture Bill before the end of this Assembly term in 2021. As the first step in taking its proposals for land management support after Brexit forward, the Welsh Government is consulting on these in Brexit and our land.

Future plans for continuing to participate in, or replacing, other EU funding sources such as Horizon Europe research and innovation funding, the ERASMUS+ student exchange programme, and the European Investment Bank remain the subject of negotiations between the UK and EU.

What does the Committee recommend should happen to secure the best deal for Wales?

The Welsh Government will consider and respond to the Committee’s recommendations, which will then be debated in Plenary.