This article was previously published on 21 December 2017. It is being reposted ahead of the Plenary debate on 16 January 2018.

Following the Welsh Government Final Budget for 2018-19, the Cabinet Secretary for Local Government and Public Services published the Final Local Government Settlement 2018-19 on 20 December 2017. This outlines funding for each of Wales’ twenty-two local authorities. The settlement will be debated in Plenary on 16 January 2018.

The total settlement is £4.214 billion, which is an increase of £8.7 million (0.2%) when compared to the Final Settlement in 2017-18. The Final Settlement includes additional funding of over £28 million compared to the Final Budget 2018-19, following allocations of £20 million to local government, £7 million to support the increase to the capital limit in charging for residential care, and £1.3 million for discretionary business rate relief.

The full breakdown of percentage changes in funding by local authority is outlined in the graph below. 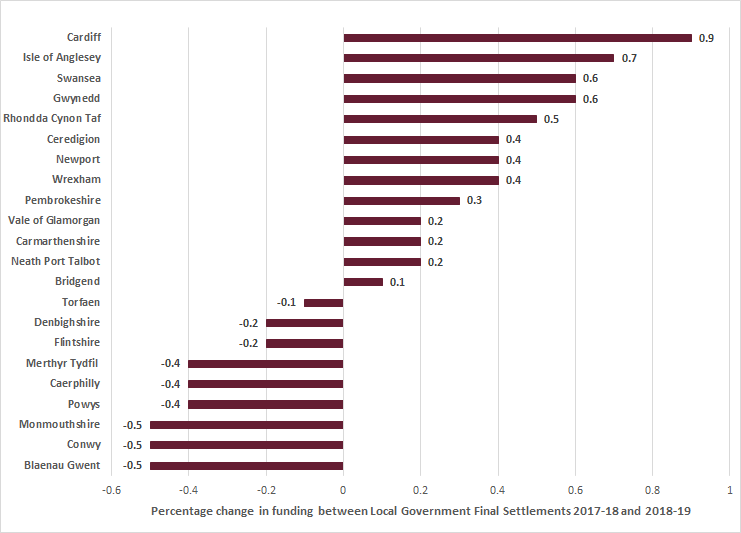 This year no authority will experience a decrease more than -0.5%, following the additional allocations made in the Final Budget. The three authorities where the funding decrease is -0.5% have received top-up funding totaling £807,000 to ensure they do not experience a reduction beyond this level, allocated as below: