Treaties are usually binding legal texts between states or international organisations. Probably the most familiar type of international law, their variety is “almost infinite”.

Treaties are a product of governments. Although different countries take different approaches, parliaments rarely have a say. The UK’s process allows only for the UK Parliament to object to a treaty in its entirety.

Scrutiny of treaties is usually carried out by state-level parliaments even though putting treaties into practice may be done by governments, parliaments or local authorities at a sub-state level.

Parliaments have increasingly called for involvement in treaty development. This goes for the Senedd too. In 2019, it became the first devolved parliament to establish a dedicated treaty process.

This article explains how the Senedd’s pioneering approach contributes to treaty scrutiny in the UK.

Treaties at the UK Parliament

The UK Government negotiates and agrees treaties on behalf of the UK via the Royal Prerogative. There is no legal requirement to consult the devolved governments and legislatures but they are often responsible for putting treaties into practice and must make sure that they comply with the UK’s international obligations.

In the UK, treaties are not automatically incorporated into domestic law and can need legislation to put them in place. Most, but not all, go through a process formalised in the Constitutional Reform and Governance Act 2010, known as “CRaG”. CRaG gives the UK Parliament an initial 21 day period to object to a treaty. If there is no objection, the UK Government can go ahead and ratify the treaty.

Despite placing the UK Parliament’s role on a statutory footing for the first time, CRaG’s limitations are well documented. It is frequently criticised, including by the UK Parliament’s own committees, who’ve said it is “limited and flawed” and want reform. Some criticisms include that:

Importantly for the Senedd, CRaG doesn’t provide a formal role for the devolved legislatures. Yet UK parliamentarians and committees have called for their involvement and have welcomed the views of the Senedd since it started looking at treaties.

Devolved involvement is also supported by experts, such as Jill Barrett, Alexander Horne, and Joanna Harrington, and practitioners, such as Deloitte and the Law Society of Scotland.

Treaties at the Senedd

As acknowledged by the First Minister, the implementation of treaties can fall within Senedd competence, place duties on Welsh Ministers and fall on Welsh public bodies to deliver.

In January 2019 during the Brexit negotiations, the Senedd developed a dedicated approach to international agreements scrutiny, led at the time by the External Affairs Committee.

The process followed treaties under CRaG and asked whether an agreement covered devolved areas, or had important policy implications for Wales. If yes, the committee would explore whether significant issues had been addressed and report to the Senedd, the Welsh and UK governments, and other UK parliaments.

A new direction for Senedd committees

After the 2021 elections, this process changed. Treaties are now initially considered by one of two Senedd committees, depending on whether they’re trade agreements or not.

The UK’s trade deals are considered by the Economy, Trade and Rural Affairs Committee (ETRA). ETRA recently took evidence on the UK-New Zealand agreement to ascertain its impact on Wales, and previously did the same for the UK-Australia deal. Both are explored in our recent article.

Most treaties are not trade related. These are considered by the Legislation, Justice and Constitution Committee (LJC). Since June 2021, LJC has considered 28 treaties and has taken further action on 12, where an impact on Wales is expected.

LJC gets information from the Welsh Government and notifies other committees of treaties within their remit. It reports regularly to the Senedd and shares its findings with the House of Lords’ International Agreements Committee.

This is not always possible within CRaG’s initial 21 day period but it proves that input from devolved legislatures is possible and can yield important results, despite CRaG’s limitations.

T-minus 21 days for scrutiny: the process

This infographic shows CRaG’s process alongside the Senedd’s process: 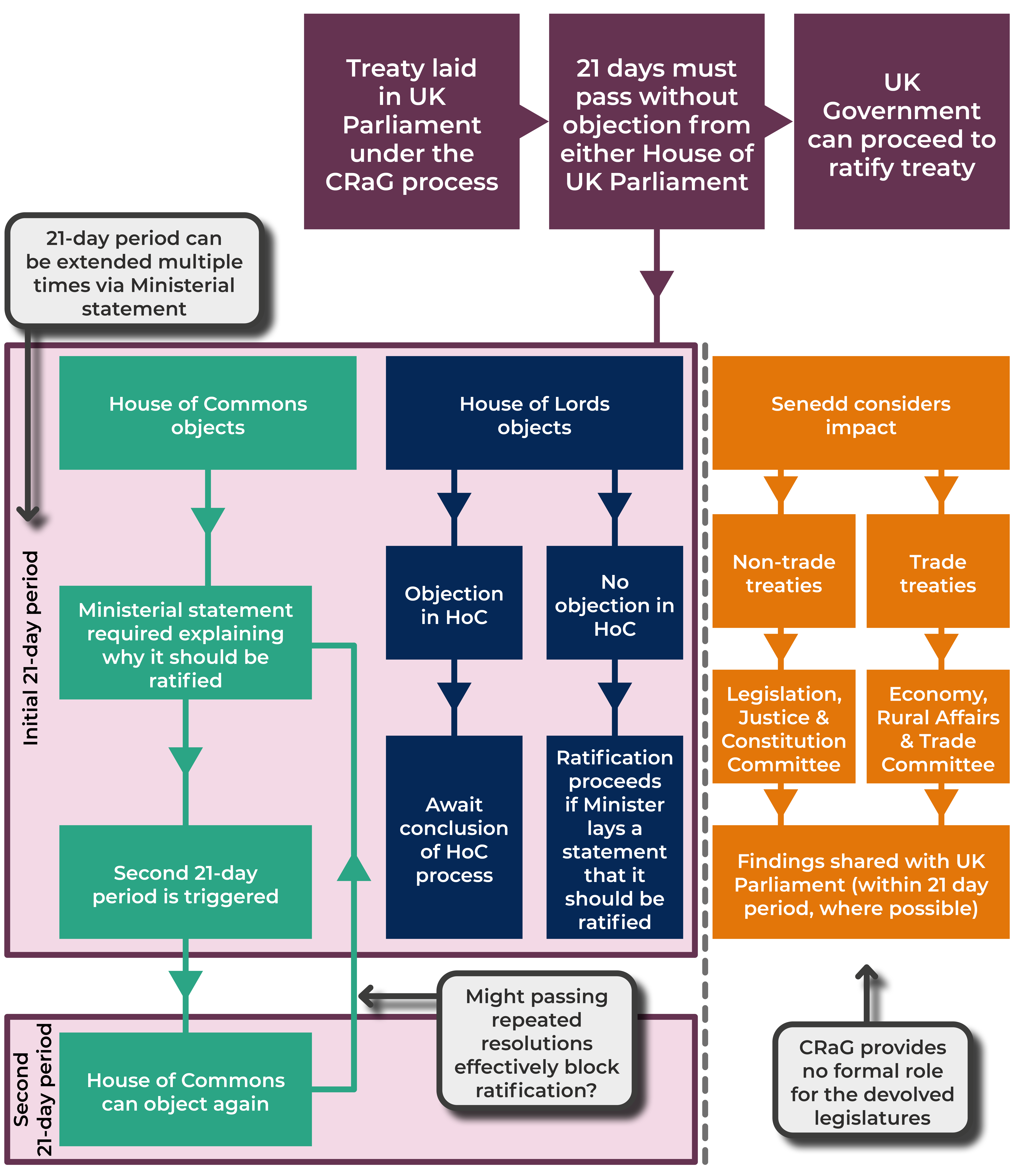 The process has already secured early wins for parliamentary scrutiny. It has:

The stars don’t look bigger but they do look brighter

The UK Parliament’s Public Administration and Constitutional Affairs Committee is looking into treaty scrutiny, following a 2020 inquiry into working practices by the International Agreements Committee. The UK Government recognised the interests of the devolved governments in its response, describing its discussions with them as “critical” for the future.

As the Senedd boldly goes where no devolved parliament has gone before, support for devolved involvement has gained ground. Early results have shone a light on the operation and impact of treaties in Wales, and on the importance of parliamentary scrutiny of international matters.