At the start of the Fifth Senedd, the previous Welsh Government took the bold step of announcing the ambitious goal of a million Welsh speakers by 2050. Looking to almost double the number of Welsh speakers in Wales, it marked a dramatic shift in policy direction.

Cymraeg 2050 – a strategy for a generation

Cymraeg 2050 – A million Welsh speakers is a strategy that spans a generation, and has three key themes:

The Fifth Senedd’s Culture, Welsh Language and Communications (CWLC) Committee found widespread support for the 2050 target and the aims within the strategy to achieve it. It noted that for the strategy to succeed, “considerable additional resources and clear targets” would be needed.

Are the numbers heading in the right direction?

The previous Welsh Government didn’t shy away from the central role the education system would play in creating the bulk of new Welsh speakers. After all, the Welsh Language Use Survey 2013-15 found that 4 out of 5 children aged 3 to 15 mainly learnt Welsh at school or nursery. 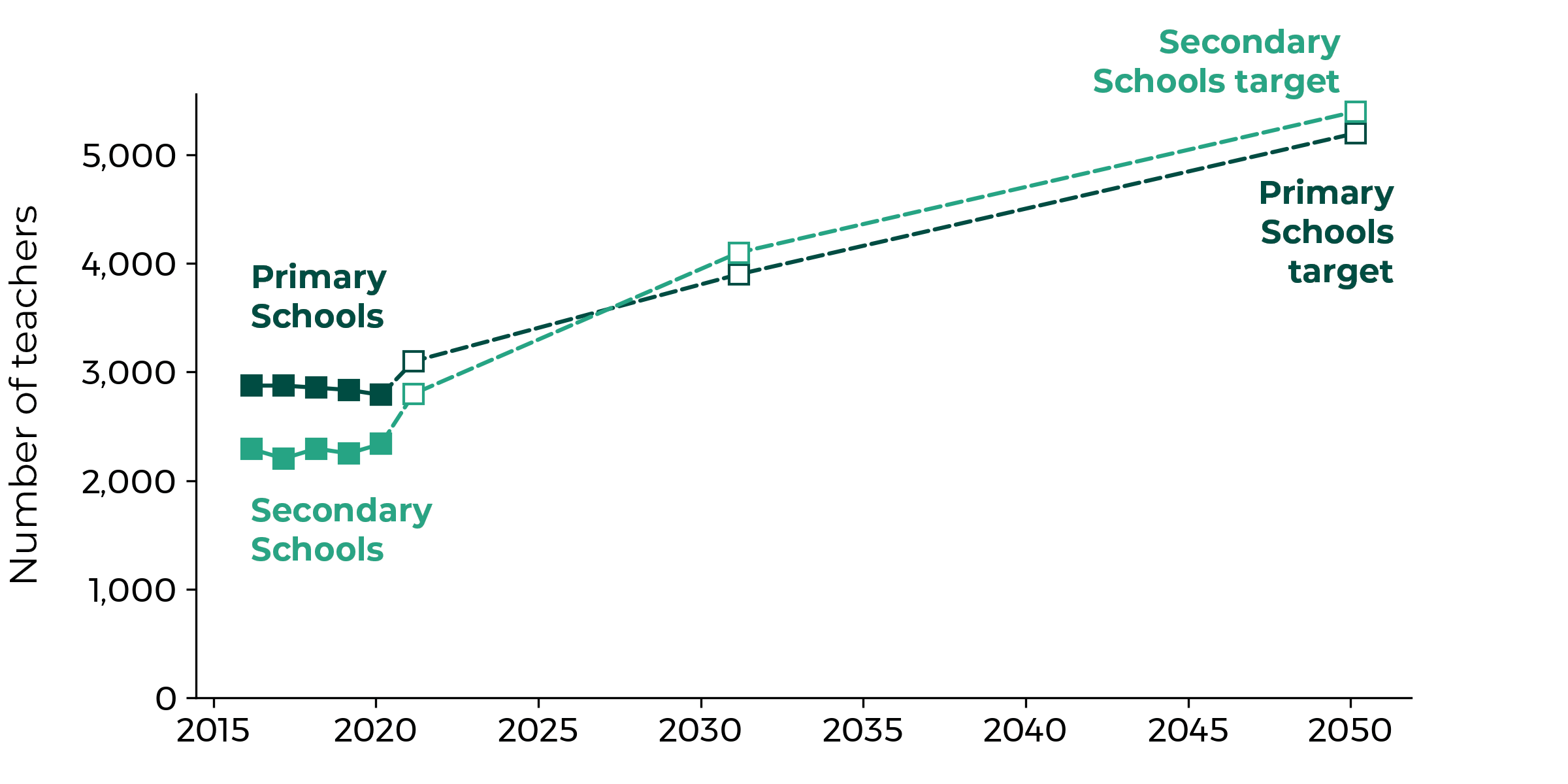 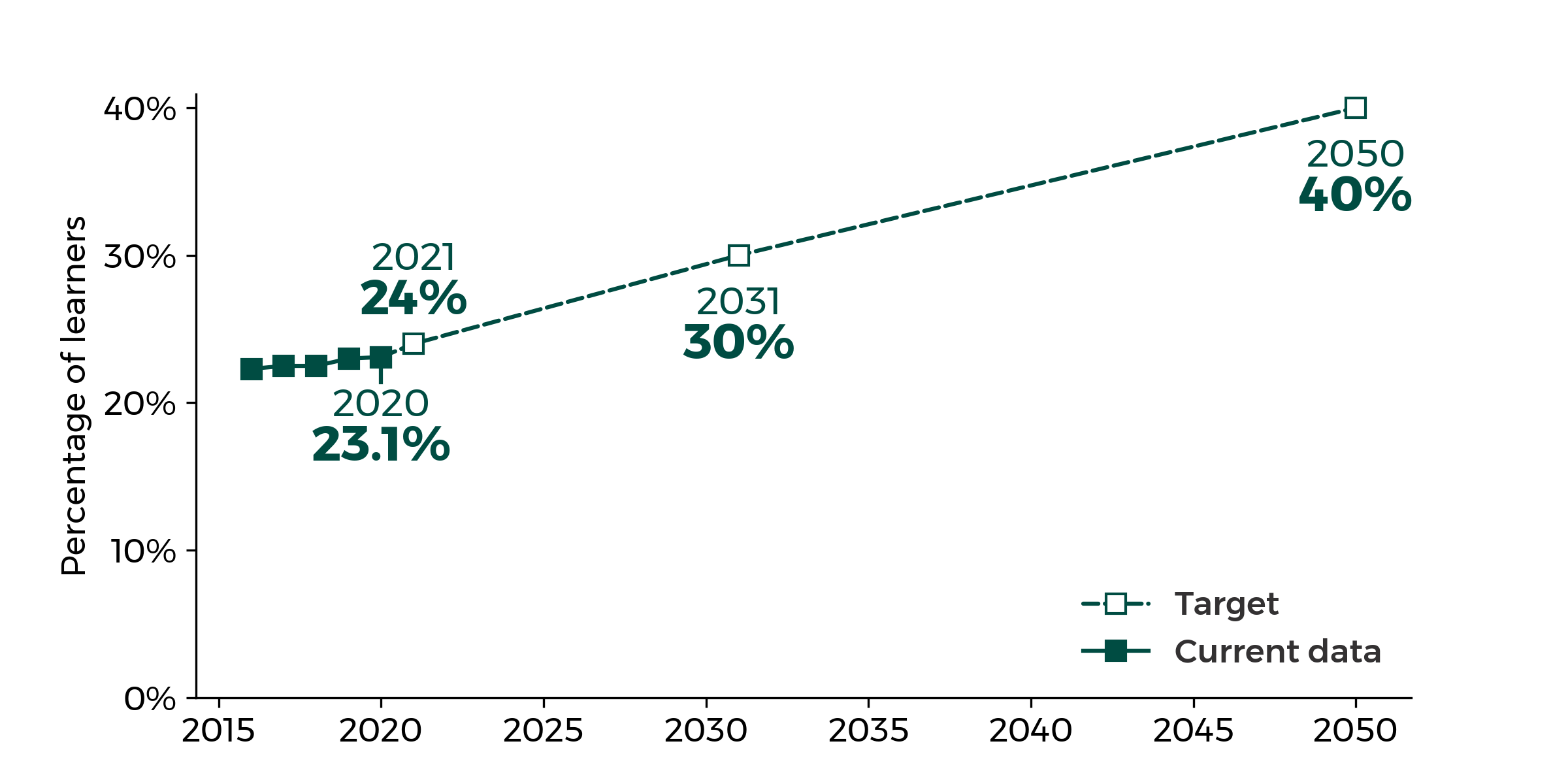 There’s been better progress on the goal to create 40 new Cylchoedd Meithrin (Welsh-medium playgroups) by 2021. The previous Welsh language Minister, Eluned Morgan, said in February 2021 that “by the end of this year [2021], we hope to have established 46 [Cylchoedd Meithrin], so we will have exceeded that target”.

Following calls for investment to develop post-16 Welsh-medium provision, the previous Welsh Government provided the Coleg Cymraeg with an additional £800,000 for 2021-22. Future investment will likely be required if Cymraeg 2050 targets are to be met.

What about day-to-day use of Welsh?

Cymraeg 2050 sets out to double the percentage of people that speak Welsh on a daily basis from 10% (Welsh Language Use Survey 2013-15 data) to 20% by 2050. Increasing usage could be far more influential to language growth than the numbers that speak it. For a language to thrive, it must be used on a regular basis – whether that is in the home, the office, in the local shop, or with friends in the pub.

Providing spaces and opportunities for people to use Welsh, particularly within their local area and workplace is central to its viability and growth. Helping the network of organisations that support and promote the language within communities has never been more critical.

The pandemic has had a significant impact on the work of this network. The effects of COVID-19 on Welsh language community groups survey found that the vast majority (68%) of regular activities had ceased after the first lockdown was announced in March 2020. Some adapted their activities to digital formats, providing opportunities to engage differently with participants, and reach out to a wider audience.

Supporting the language to grow?

Various interventions, resources and innovations are needed to help those learning the language and encourage its daily use. These can range from policies that support jobs growth in Welsh speaking communities to the development of the translation profession. The previous Welsh Government’s Welsh Language Technology Action Plan supports innovative technology developments to assist and enable people to live their lives through the medium of Welsh.

There’s also been investment in developing artificial intelligence to allow Welsh to be used with ‘bots’, for example. The hope is that in future, Welsh speakers will be able to use Welsh with their voice assistants, such as Siri and Alexa.

In March 2021, the previous Welsh Government launched a consultation on a National policy on Welsh linguistic infrastructure. The proposals seek to coordinate and make it easier for people to use Welsh language resources. This may include developing dictionaries and terminology, or creating a central portal to access them. How that’s taken forward will very much depend on the new Welsh Government.

Will mainstreaming the language help?

For Cymraeg 2050 to succeed, it will require the new Welsh Government to embed the Welsh language across all policy portfolios. One criticism consistently raised during the Fifth Senedd was that the Welsh Government’s Welsh Language Unit lacks ‘clout’ within the civil service. The Fifth Senedd’s CWLC Committee inquiry on Supporting and Promoting the Language recommended that:

The Welsh Government should move to enhance the status and role of the Welsh Language Unit... The Unit should also have an increased cross-governmental role, ensuring internal arrangements for effective implementation of Cymraeg 2050 is undertaken across government departments.

There’s also debate as to where national oversight of Welsh language policy should sit within the Welsh Government. As the previous Minister noted during scrutiny:

I would suggest that actually, rather than just holding me to account when it comes to the budget… that actually you ask the other Ministers, who've got huge amounts of money, what they're doing within their budgets in relation to the Welsh language.

The Welsh Language Budget that specifically supports and promotes the language is currently a modest £38 million, dwarfed in comparison to other departmental budgets. Cymdeithas yr Iaith has long called for the Welsh Government to commit 1% of its total budget to promote the language. The figure for 2021-22 stands at 0.19%.

Language planning is complex. It requires systematic and innovative approaches, resources and most importantly, harnessing the continued support of the people of Wales.

All eyes will soon turn to the Census 2021, which is considered the authoritative source of data on the number of Welsh speakers in Wales. The Census is the yardstick that will be used to establish progress on Cymraeg 2050 targets over the next few decades. Along with data from the Welsh Language Use Survey, the National Survey for Wales and the Annual Population Survey, it will provide the next Welsh Government with critical data on the health of the language.

If the Census 2021 data shows an increase in the number of Welsh speakers, it will provide some vindication for the ambition and targets set in Cymraeg 2050. A decrease will only intensify pressure on the next Welsh Government to consider a different approach.