Thursday 17 May is the International Day against Homophobia, Biphobia and Transphobia (IDAHOTB). The day aims to draw the issues faced by LGBT people across the world to the attention of decision-makers, the media, local authorities and the public.

So, what is the reality for LGBT people living in Wales today?

A 2017 YouGov survey of 1,200 LGBT people in Wales, undertaken for Stonewall Cymru, found that: 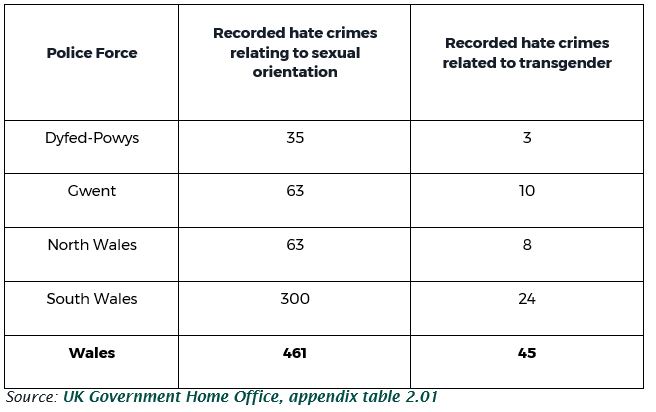 The Stonewall survey also found that one in five LGBT people (19%) who visited a café, restaurant, bar or nightclub in the last 12 months have been discriminated against based on their sexual orientation and/or gender identity, which increases to 32% for trans people. More than third of LGBT people (36%) say that they avoid certain bars and restaurants due to fear of discrimination, while more than half of trans people (55%) avoid certain venues.

In May 2014 the Welsh Government published its Tackling Hate Crimes and Incidents: A Framework for Action, which aims to prevent hate crime, support the victims of hate crime and improve the multi-agency response to hate crime. This framework is supported by an annually updated delivery plan, along with annual progress reports, with the latest delivery plan and progress report being those for 2016-17.

While Victim Support has been commissioned by the Welsh Government as the Official National Hate Crime Report and Support Centre for Wales, with the aim of increasing the reporting of all hate crimes and hate incidents and to offer support to victims of these offences, Stonewall’s LGBT in Wales: Hate Crime and Discrimination suggests that more needs to be done.

It recommends that the Welsh Government should develop and deliver a new national framework for tackling hate crime and supporting victims, working with devolved and non-devolved agencies to increase reporting rates, improve responses and support for victims.

Stonewall also suggests that all police forces should: