The United Nations has voiced concerns that the pandemic could lead to a “lockdown generation” that “face permanent exclusion from the labour markets”.

In a debate in July, a number of Members of the Senedd raised concerns about mass youth unemployment resulting in a ‘lost generation’. Professor Ewart Keep of Oxford University in evidence to the Economy, Infrastructure and Skills Committee warned that youth unemployment was a “huge looming issue” for Wales.

The Welsh Government has acknowledged that “young people in particular may carry the burden of dealing with coronavirus with them through their working lives”.

This article covers the economic impact of the pandemic on young people so far and the potential long-term impacts of youth unemployment based on past recessions. It also looks at the policies the Welsh and UK Governments are putting in place to try to minimise youth unemployment, along with recent proposals from wider UK non-governmental organisations.

Over the last decade young people starting work have increasingly been employed in occupations that have been the most seriously affected by the coronavirus pandemic, such as hospitality and non-food retail.

Figure 1: Percentage of workers employed in ‘shutdown sectors’ in 2019 by sex and age 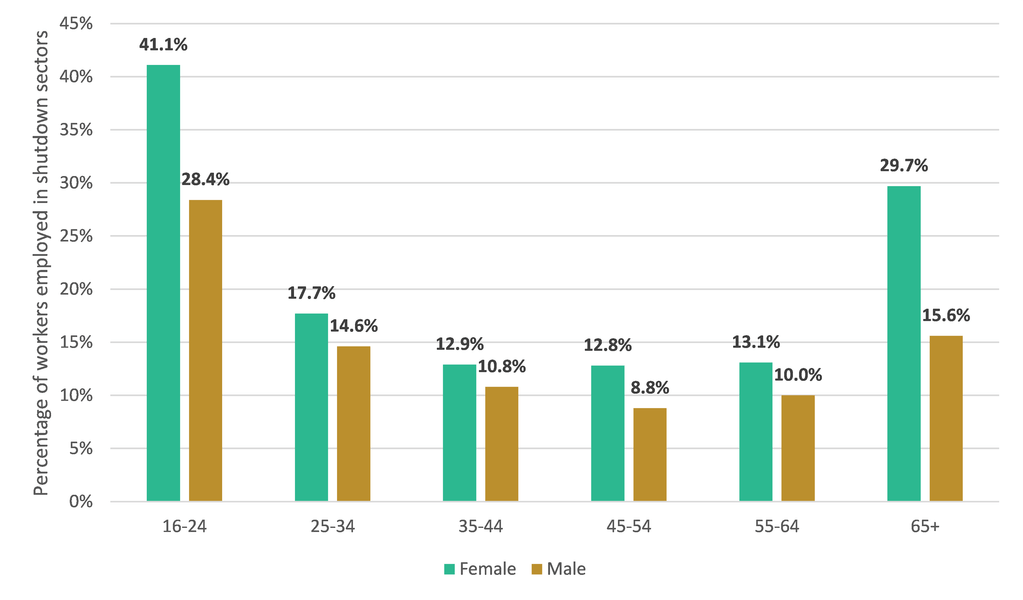 Young people have been the most likely to be furloughed under the UK Government’s Coronavirus Job Retention Scheme. Across the UK, 47% of jobs filled by workers aged 24 and under were furloughed for at least some of the time between 1 March and 30 June 2020, compared to 32% of all jobs.

As with the rest of the UK, youth unemployment has increased in Wales during the pandemic and the impact on young people has been greater than for other age groups.

The most up-to-date indicator of youth unemployment for Wales is the claimant count (although this has some limitations). The claimant count includes people who are either claiming Job Seeker’s Allowance or are required to search for work as a condition of receiving Universal Credit.

Source: Office for National Statistics, NOMIS Labour Market Profile Wales – Claimant count by age time series.
Note: There are only certain circumstances under which under 18s can claim JSA or Universal Credit, so 18-24 tends to be used as the main measure for the claimant count rather than 16-24.

The Centre for Economic Performance at the London School of Economics has stated that the three most recent UK recessions prior to the current one (early 1980s, early 1990s and 2008 financial crisis) all had a disproportionate impact on the poorest, the youngest, those with least educational qualifications, and ethnic minorities.

Professors Bell and Blanchflower highlight the permanent, or ‘scarring’, impacts of youth unemployment. These particularly affect a young person who is long-term unemployed:

The IFS notes how ‘scarring’ might impact young people who become unemployed during the pandemic, stating that:

The COVID-19 pandemic has severely dented the career prospects of young people and threatens to have a prolonged negative economic impact on them as a result. Sharp contractions in shut-down sectors will make it harder for young people to take their first step onto the career ladder, while reduced job opportunities will make it harder for them to move into higher-paying occupations.

The Resolution Foundation highlights that workers with fewer qualifications are likely to be hardest hit, stating that employment levels and pay of these workers will be impacted much more than graduates. It concludes that:

…the current crisis may reduce the employment chances of lower-skilled young adults leaving education by more than a third, even years down the line when the direct economic effects of the crisis will (hopefully) have abated.

The Prince’s Trust has highlighted the impact of youth unemployment on mental health and wellbeing, stating that young people who are not in employment, education or training are more likely to report challenges to their emotional wellbeing than other young people. These include lower levels of happiness, anxiety, and a lack of confidence.

The Welsh Government announced a £40 million skills and jobs fund in July. It said that £20 million of this fund would be used to “incentivise employers to recruit and retain 5,000 apprentices [and] increase the capacity of traineeship programmes”. Part of this funding will also be used to create a ‘Barriers Fund’ to offer up to £2,000 to support people who may not have previously considered self-employment, in particular women, young people, people from BAME communities and disabled people.

The Welsh Government has also made £1.5 million available to the Higher Education Funding Council for Wales (HEFCW) to “support more graduates to access work experience, work tasters and paid work placements”. HEFCW is currently consulting on the scheme.

In July the UK Chancellor, Rishi Sunak MP, announced a ‘Kickstart’ Scheme, which will operate in Wales and “will directly pay employers to create new jobs for any 16 to 24 year old at risk of long-term unemployment”. If businesses meet certain requirements of the scheme, the Treasury will “pay young people’s wages for six months, plus an amount to cover overheads”.

On 6 October the Welsh Government published a coronavirus reconstruction report. This includes the priority that:

We will make sure that our young people do not lose educationally or economically through the effects of coronavirus or because of any economic downtown that is not of their making.

These new announcements are in addition to, or provide additional funding for, existing employability support programmes, including:

David Hagendyk, Director for Wales at the Learning and Work Institute, told the Senedd’s Economy, Infrastructure and Skills (EIS) Committee that the Institute has “been arguing for…a youth opportunity guarantee”. This would involve “expanding college, university and training places” but is also “about making sure the skills system and the employment system are really joined up together”.

The Sutton Trust recommends that the UK Government “set aside a portion of the funding for the Kickstart scheme for a programme targeted specifically at graduates”, which would “pay for internships with graduate employers”.

The Resolution Foundation says that “one-on-one advice and support is an important triage tool”. However, it notes that “with so few job vacancies opening up, much more will be needed” to prevent “high levels of youth unemployment”. The Foundation suggests that the smaller number of apprenticeship vacancies should be prioritised for those under the age of 25. It also argues that governments should be “working with employers to provide work experience and job interviews in sectors that match young leavers’ interests and previous study aims”.

Business in the Community has highlighted several actions that employers can take to help mitigate against a ‘lost generation’. These include “protecting jobs for young people” and “inspiring the next generation of talent” by “removing barriers and actively hiring young people” as well as “ensuring young people have development and progression opportunities”.

Tomorrow the EIS Committee meet to consider youth unemployment, you can watch that on Senedd TV. Once the Committee has finished taking and analysing evidence as part of its inquiry into COVID-19 recovery, it will produce a report that makes recommendations to the Welsh Government.