Citizens’ rights after Brexit: an update

Freedom of movement between the UK and the EU ends on 31 December 2020. Preparations are underway to allow UK citizens who live in the EU to continue doing so after this date, and vice versa.

The UK and the EU committed to set up ways to do this in the Withdrawal Agreement. The UK established its EU Settlement Scheme (EUSS), and each 27 EU Member State (EU27) established their own schemes, supported by the EU.

The operation of the EUSS has been a key concern of the Senedd’s External Affairs and Additional Legislation Committee. It first reported in this issue in November 2019 and has continued to pursue the issue in its scrutiny of the Welsh and UK governments.

This blog post provides an update on the roll out of the schemes, including updated data on applications from Wales.

For ease, we refer to EU, European Economic Area (EEA) and Swiss citizens  as ‘EU citizens’ in this article. The Research Service has produced blogs on this topic previously, in January 2020 and September 2019..

EU citizens living in the UK must apply to the EU Settlement Scheme (EUSS) to continue living in the UK after 30 June 2021. This is the current application deadline set by the UK Government.

The rights of EU citizens living in the UK were agreed as part of the UK-EU Withdrawal Agreement and will be monitored by a new Independent Monitoring Authority (IMA) (PDF, 917KB), to be based in Swansea and operational from the end of the transition period (31 December 2020). The UK’s system is a digital application system and EU citizens will not be given physical proof of their right to remain in the UK.

Estimating exact numbers of EU citizens in the UK and their eligibility to apply for the EUSS is difficult but it’s thought to be around 3.8 million.

UK Government statistics published on 27 August show that over 3.8 million applications to the EUSS were received up until 31 July, almost 3.6 million of which have been processed. The reason for there being more applications than estimated EU citizens living in the UK is attributed to repeat applications and double-counting.

62,700 applications to the EUSS were received from Wales up until 31 July against an estimated 66,000 eligible EU citizens living in Wales.

Since the launch of the EUSS, the proportion of applications received from Wales against the eligible population had been behind the rest of the UK. However, the latest statistics show that the proportion in Wales is now greater than in Scotland.

Estimated percentage of applications received, by country and settled status, against the eligible population 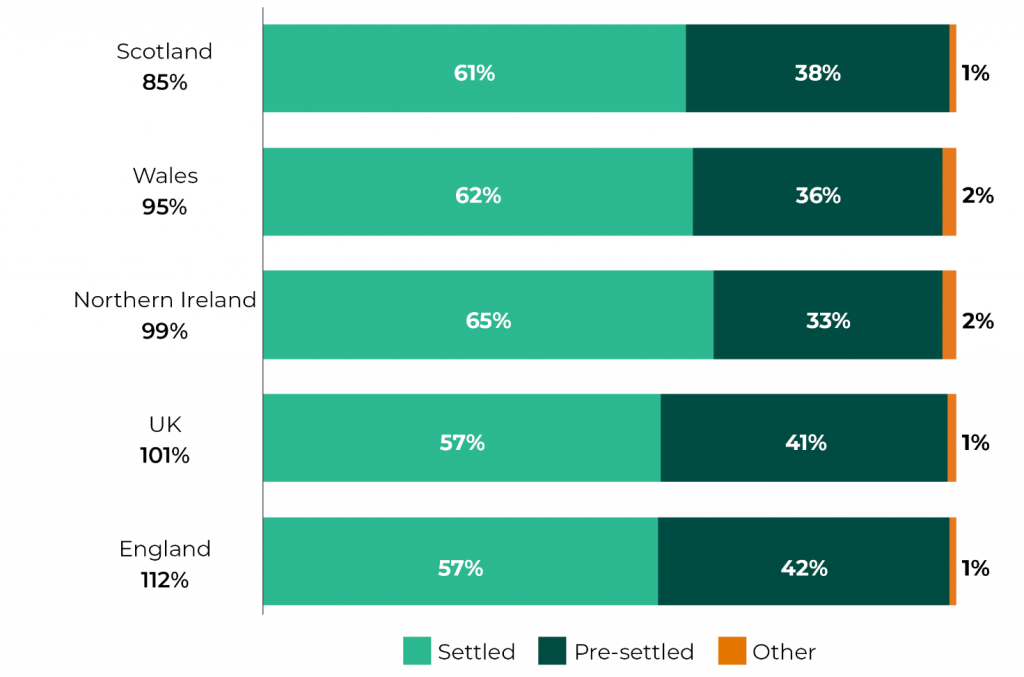 Additionally, in January, Counsel General and Brexit Minister, Jeremy Miles, told the BBC that a “seemingly high proportion” of Wales’ applicants had been granted pre-settled status, rather than settled status. The latest UK Government report, however, shows that the proportion of people being granted settled status is now higher for Northern Ireland, Wales and Scotland (65%, 62%, 61% respectively), compared to England (57%).

Immigration is not a devolved matter but the Welsh Government has consistently said that it wants EU citizens to stay in Wales and has launched a package of free support to assist them with applying to the EUSS. This includes an Immigration Advice Service, which signposts partner organisations offering free specialist immigration advice, advice on social welfare and workers’ rights.

In August, the Counsel General and Brexit Minister, Jeremy Miles, wrote to the Senedd’s External Affairs and Additional Legislation Committee (PDF, 4MB) to confirm that the Welsh Government’s “central concern” is to reach Wales’ EU citizens in vulnerable or more excluded groups before the application deadline.

However, the Senedd’s Equality, Local Government and Communities Committee recently received evidence from the Bevan Foundation, which explains that much of the face to face-delivered support and awareness raising was postponed as a result of the coronavirus pandemic and describes this as a “major setback.” The Committee’s report (PDF, 478KB) recommended that the Welsh Government should ensure that its EUSS awareness programmes are being run in alternative ways which take account of the on-going restrictions on face to face meetings.

In the EU, each Member State is responsible for its own scheme for UK citizens. Each Member State has chosen one of two different types of settlement scheme, as follows:

14 Member States have chosen a declaratory system. This does not require UK citizens to apply for a new residence status as a condition for legal residence and no further action is required of them. The EU will provide a physical residence document for these citizens, which will take the same format in the 14 Member States.

13 Member States have chosen a constitutive system. This is similar to the UK’s system in that it requires UK citizens to apply for a new residence status within the deadline set by the Member State in which they live. The earliest the deadline can be is 30 June 2021. Member States plan to use administrative procedures for this that could require face to face meetings. This is different from the UK’s process, which is completely digital.

People from Wales living in EU Member States should check which scheme their resident country has chosen and its application deadline, which can be different in different Member States.

Following the second meeting of the UK-EU Specialised Committee on Citizens’ Rights on 6 August, it emerged that UK citizens already resident in EU Member States may be given additional freedom of movement rights after the end of the transition period.

European Commission officials reportedly confirmed to Politico that UK citizens living in one Member State could be entitled to settle in a different Member State than the one they live in, for purposes including to work and study. Those who have lived in the EU for more than five years could also be granted additional benefits, such as being able to leave their host country and return without losing their status.

In May, a dispute over citizens’ rights emerged between the UK and the EU, who are both jointly responsible for the implementation of the Withdrawal Agreement.

On 14 May, the EU Commission launched infringement proceedings against the UK for failing to comply with EU law on the free movement of EU citizens and their family members. On the same day that the EU launched its proceedings, the UK Government raised concerns on behalf of UK citizens living in EU Member States in a letter to the EU Commission. The concerns relate to inconsistencies amongst the EU27 in the communication of key information, the application process, and support for vulnerable citizens.

The EU’s response to the UK Government on 28 May welcomed the progress made by the UK’s settlement scheme but said that it remains concerned about the ability of vulnerable citizens to apply ahead of the UK deadline and about complaints from EU27 citizens that access to social benefits has been refused by UK authorities. The response also set out action taken by the EU to alleviate the concerns of the UK Government. Furthermore, EU Chief Negotiator, Michel Barnier, advised on 2 September that the EU "will also continue be extremely vigilant when it comes to ensuring the full respect of citizens' rights under the Withdrawal Agreement.”

From January 2021, the UK will have a new point-based immigration system for all EU and non-EU citizens.