How are schools in Wales funded and what are the main issues?

The Committee’s main recommendation, which the Welsh Government has accepted, is that it commission an urgent review of how much funding schools need, particularly given the level of reform currently being undertaken in education.

Although not part of the formal recommendation, the Committee suggested that the review should be undertaken with a similar objective to the 2014 Nuffield Review, which considered the funding gap facing the Welsh NHS.

Why is school funding such a topical issue?

Stakeholders, including teaching unions and local authorities, are concerned that insufficient funding risks the successful delivery of key reforms such as the new curriculum and the implementation of the new Additional Learning Needs (ALN) system, as well as meeting the priority of school improvement and raising standards.

The CYPE Committee’s report highlights that the pressure on school budgets and the effect this has on children and young people’s education has been regularly raised during its scrutiny work over the past few years.

Concerns were also expressed about a lack of transparency and inconsistencies in the distribution of funding to schools, in particular, the balance of funding for schools’ core budgets (provided via local authorities) and national education priorities (provided by the Welsh Government).

The CYPE Committee therefore looked at both the sufficiency of provision for school budgets and the way that funding for schools is determined and allocated.

The process for allocating and distributing school funding is complex, as illustrated in our infographic below (for a more detailed explanation, see our guide to School Funding in Wales, August 2018). 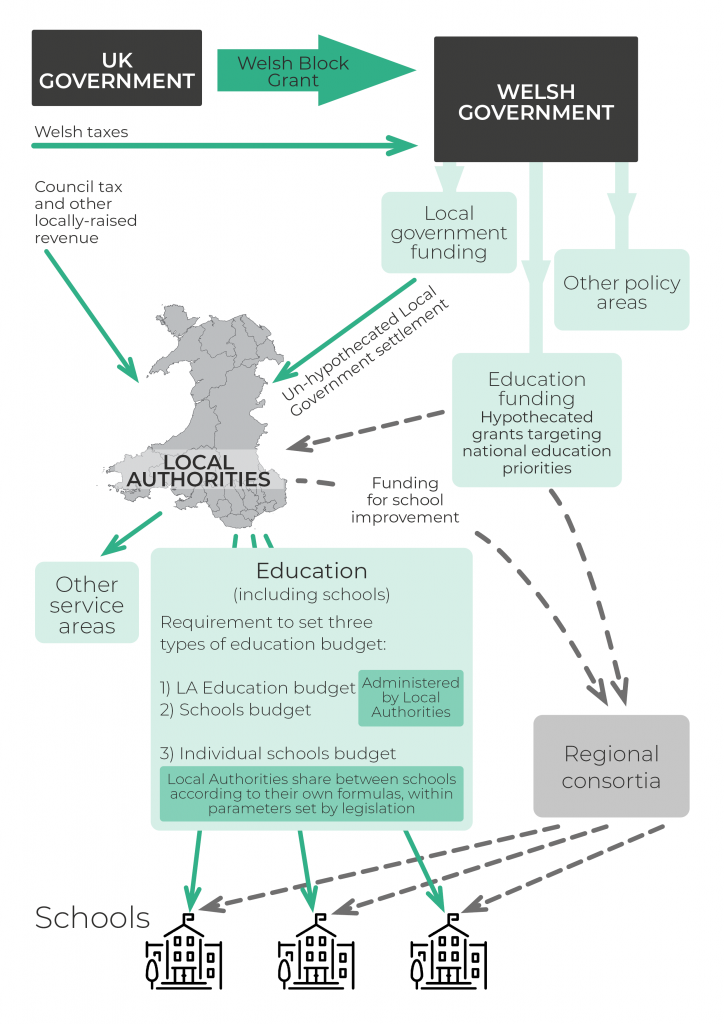 The process for arriving at a school’s core budget is multi-layered and based on a number of different factors, which can be summarised as follows:

Whilst the vast majority of funding for schools is allocated via local authorities, the Welsh Government’s education budget provides additional funds for specific, targeted purposes. Some of this money goes in its entirety to schools, for example the Pupil Development Grant (PDG) but much of it is channelled through the four regional consortia (PDF 1MB).

The table below shows how much has been budgeted for expenditure on schools since 2010-11: 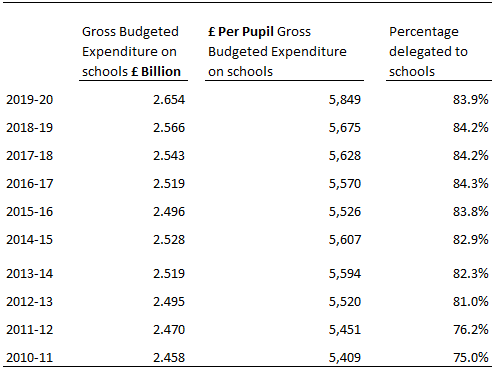 The data in Table 1 shows that:

The Welsh Government stopped publishing data on school funding levels in Wales and England in 2011, stating that it was no longer possible to produce robust, comparable data. However, in 2018, the Institute of Fiscal Studies’ analysis concluded that once London is discounted, there is virtually no difference in per pupil funding between Wales and England (see page 21 of School Funding in Wales for more information).

How is school funding used?

Local authorities provide the vast majority of funding for schools’ core budgets, which comes from the un-hypothecated local government settlement (£2.015 billion of the total £2.654 billion in 2019-20).

An additional £428 million is retained and administered by local authorities for services which may be provided centrally for reasons of efficiency, economies of scale or because they are specialised or essentially central services, such as school transport.

A further £211 million of grant funding is devolved to schools, alongside their core budget.

The four regional consortia receive approximately £11 million per year from local authorities for their school improvement services and are responsible for distributing around £140 million of Welsh Government grant funding (these amounts are part of the figures cited above).

Table 2: Breakdown of gross budgeted expenditure on schools in 2019-20 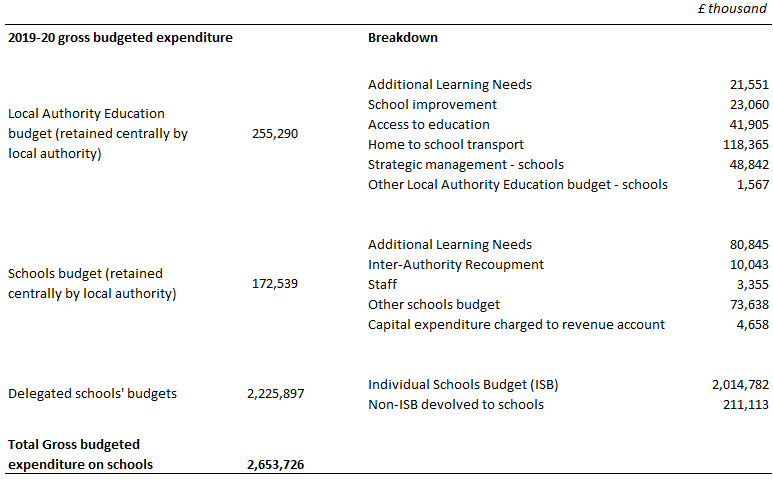 How has the Welsh Government responded?

The Welsh Government accepted all 21 of the CYPE Committee’s recommendations.

As stated previously, the Committee’s recommendations included that there is an urgent review to assess how much funding schools require to deliver on their responsibilities, including implementing the considerable reforms underway. The Minister for Education, Kirsty Williams AM, is expected to give more details during the Plenary debate on how this school funding review will be taken forward.

The debate is scheduled for Wednesday 23 October 2019 at approximately 4.25pm. The Plenary session will be broadcast on Senedd TV and a transcript will be available on the Assembly’s Record of Proceedings.