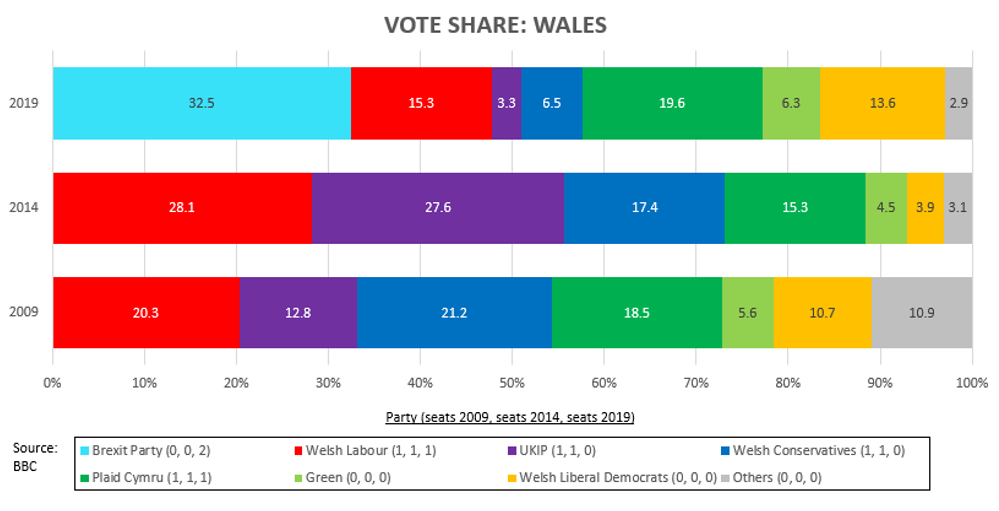 In order of votes received, the four new MEPs for Wales are:

The Brexit Party won in 19 of the 22 council areas, converting their support to two seats. UKIP lost its seat, receiving 3.3% of the vote compared with 27.55% in 2014. Plaid Cymru came second, ahead of Labour for the first time in a Wales-wide election. One of the main headlines in Wales is the losses suffered by both the Conservatives and Labour, with their vote percentage decreasing significantly as voters turned to new or smaller parties. The Conservatives came in fifth place and lost their seat. Labour came third but held on to its one seat. The results heralded the second Labour defeat in a Wales-wide election for a hundred years. In response to both the election results and the Prime Minister’s announcement that she will resign on 7 June, the First Minister clarified Welsh Labour’s position:

I have now concluded that the only way we can try to guarantee a future for Wales that would not be a catastrophe is to put this decision back to the people in a referendum.

The chance of doing a deal of the sort that we have always advocated seems to me now to be at an end. There's no prospect of that happening sadly, and in those circumstances our view is that going back to the people, in what has been a very deeply divided society, asking people for their verdict again is the best way forward.

Faced with the damage of a hard-line, Tory Brexit, Welsh Labour believes that the final decision must be made by the public in a referendum. And, for the avoidance of any doubt, a Welsh Labour Government would campaign, in such a vote, for Wales to remain in the EU.

The impact of this position remains to be seen but will be one to watch in the coming months as inter-UK Brexit discussions continue.

The UK has 73 seats in the European Parliament, divided across 12 electoral regions. Turnout in 2019 was 36.9%, which was higher than in the 2014 elections, when it was 35.4%. The full UK results can be found on this BBC webpage. The Brexit Party won the highest percentage of votes in the UK with 31.6%. The Liberal Democrats came second with 20.3%, an increase on its 2014 result of 6.9%. Labour came third with 14.1%, followed by the Green Party with 12.1%. Both Labour and Conservatives suffered losses of -10% and -15% respectively. Plaid Cymru and the Scottish National Party (SNP) both increased their vote percentage, with Plaid Cymru retaining their one seat and the SNP gaining one seat. UKIP suffered losses with a reduction in support from 27.5% in 2014 to 3.2% in 2019. Northern Ireland, elected women to its 3 seats for the first time (one from each of the DUP, Sinn Féin and the Alliance Party). The UK results by percentage share of total votes since 2009 are: 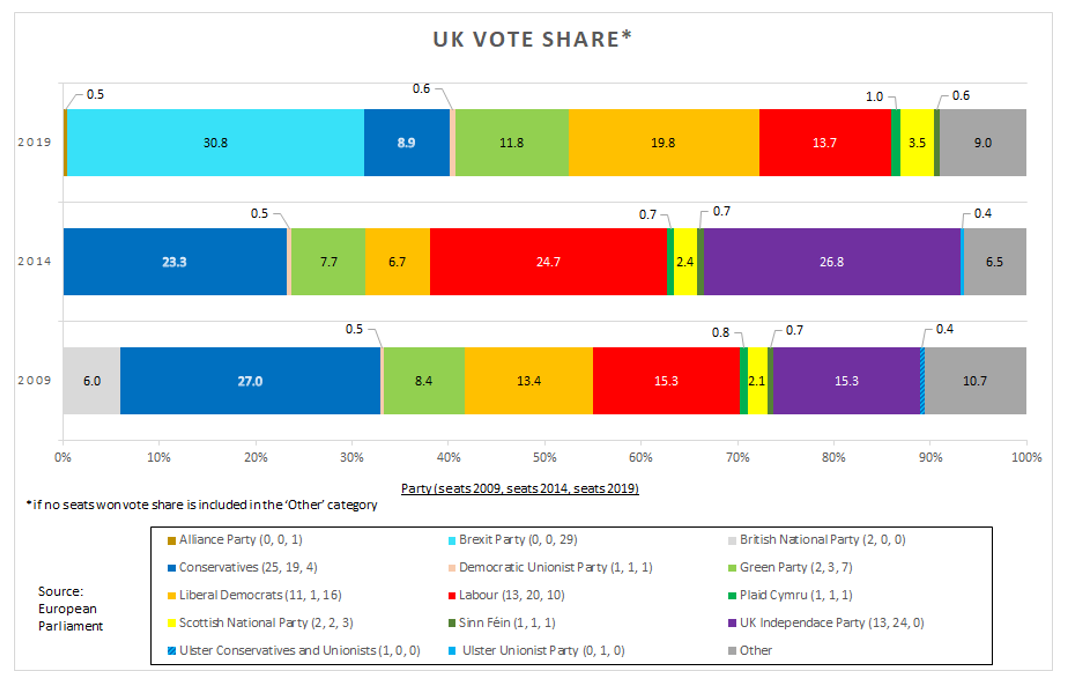 UK MEPs elected on 23 May might never take up their seats if an agreement is reached on the Brexit withdrawal deal prior to 2 July when the new European Parliament sits for the first time. If this happens, the EU Parliament has confirmed that it will hold an ‘extraordinary session’ to ratify the agreement. This would involve recalling the Parliament in its 2014-2019 composition, meaning that MEPs who have not been re-elected or who have retired would return for one last time.

The European Parliament is made up of 751 MEPs, arranged in political groups and allocated based on the population of each Member State. The provisional seat allocation for each group is: 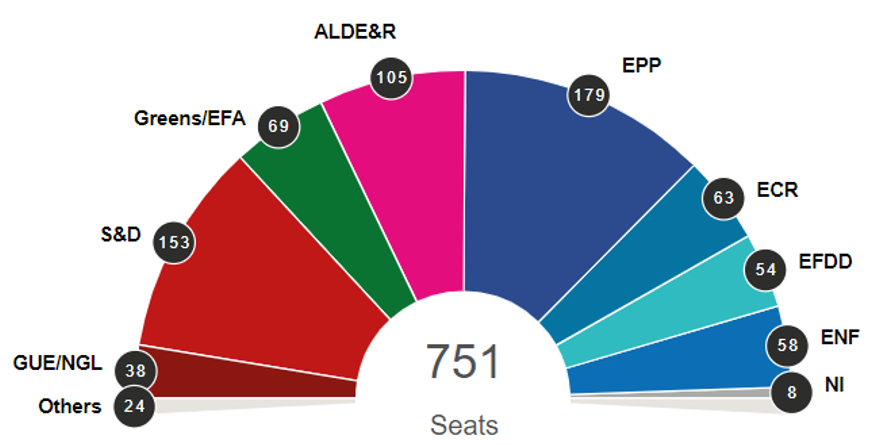 Due to a rise in support for the Greens, Liberal Democrats and far-right parties, the two main groups lost their combined majority. Both the centre-right European People’s Party (EPP) and the centre-left Progressive Alliance of Socialist and Democrats (S&D) each suffered losses, although they remain the largest and second largest groups with 22% and 20% of the vote respectively. The Alliance of Liberals and Democrats for Europe (ALDE) group won 14.2% of the vote share, potentially gaining 43 seats.

Before the European Parliament holds its first session, there will be a European Council Summit on 20-21 June, where EU leaders will meet to decide on certain appointments and adopt the EU’s strategic agenda for 2019-2024. The summit also provides the next opportunity for the EU to formally review the progress of negotiations on the UK’s exit from the EU.

The new MEPs already have key dates in their diaries. Once political groups have been formed, the first plenary session of the European Parliament will take place on 2 July. The European Parliament plays a role in the selection of key senior EU posts and 2019 is a particularly busy year for the EU. By the end of 2019, five of the most senior jobs will fall vacant. Presidents are needed for the European Parliament, the Council, the Commission and the European Central Bank, in addition to a new foreign policy high representative.

After the UK’s new exit day of 31 October (or before then, if an agreement is reached), the UK will cease its representation at EU institutions, meaning that Welsh MEPs will no longer sit in the European Parliament. Between exit day and December 2020 (the transition period), Wales will continue to be subject to EU laws but will no longer be part of EU decision making. The presence of UK MEPs will impact on the formation of, and funding allocations for, political groups in the Parliament, including the election of its President. If there are UK MEPs over the summer, this could also influence the selection process for the next European Commission President. UK MEPs will remain in place if exit day is postponed again beyond 31 October.