Devolution 20 – How has the Welsh environment changed?

Much has changed in Wales in the twenty years since the first National Assembly for Wales was elected in May 1999. This is the fifth in a series of articles that attempts to describe some of that change. It has been prepared by Senedd Research as part of the Assembly’s activity to mark twenty years of devolution.

Wales’ environment is made up of a plethora of rich habitats. It is characterised by its upland and mountainous landscape, and is subject to a wetter climate than much of the rest of the UK. Its position on the boundary of three oceanic and climatic zones, and having one of the world’s largest tidal ranges, combine to provide Wales with a myriad of wildlife. It has 1,702 miles of coastline, award winning beaches, and is the first country in the world to have a dedicated and complete 870 mile coastal footpath.

Looking back on what has changed in Wales’ environment in twenty years of the Assembly is difficult; short term environmental action will have long term consequences, so we will often not see the impact of an action, positive or negative, for decades.

The story of the last twenty years has been focused on learning about the current status of the environment, and the longer term trends that have brought about this status. We do know that biodiversity continues to decline, yet renewable energy generation has increased. Carbon emissions have fallen more slowly in Wales than the rest of the UK and actually increased in 2016 (the latest year for which figures are available).

Wales has put legislative tools in place to sustainably manage and protect the environment. The Assembly passed the world-leading Wellbeing of Future Generations (Wales) Act (WFG) 2015 which places a legal duty on the Welsh Government and other public bodies to act in accordance with the sustainable development principle - ensuring that the needs of the present are met without compromising the ability of future generations to meet their own needs. The Act contains seven well-being goals – with goal 2, a resilient Wales, calling for:

A nation which maintains and enhances a biodiverse natural environment with healthy functioning ecosystems that support social, economic and ecological resilience and the capacity to adapt to change (for example climate change).

Complementing this, the Assembly also passed the Environment (Wales) Act 2016 which introduced tools to plan and manage natural resources, aimed at ‘positioning Wales as a low carbon, green economy, ready to adapt to the impacts of climate change’.

Since 1999 the Assembly’s Committees have been active in scrutinising the Welsh Government on its approach to the environment.

Figure 1 below displays Wales’ land cover; it’s mostly agricultural, forestry and semi natural areas, with less than 6% of Wales is classified as an artificial surface. 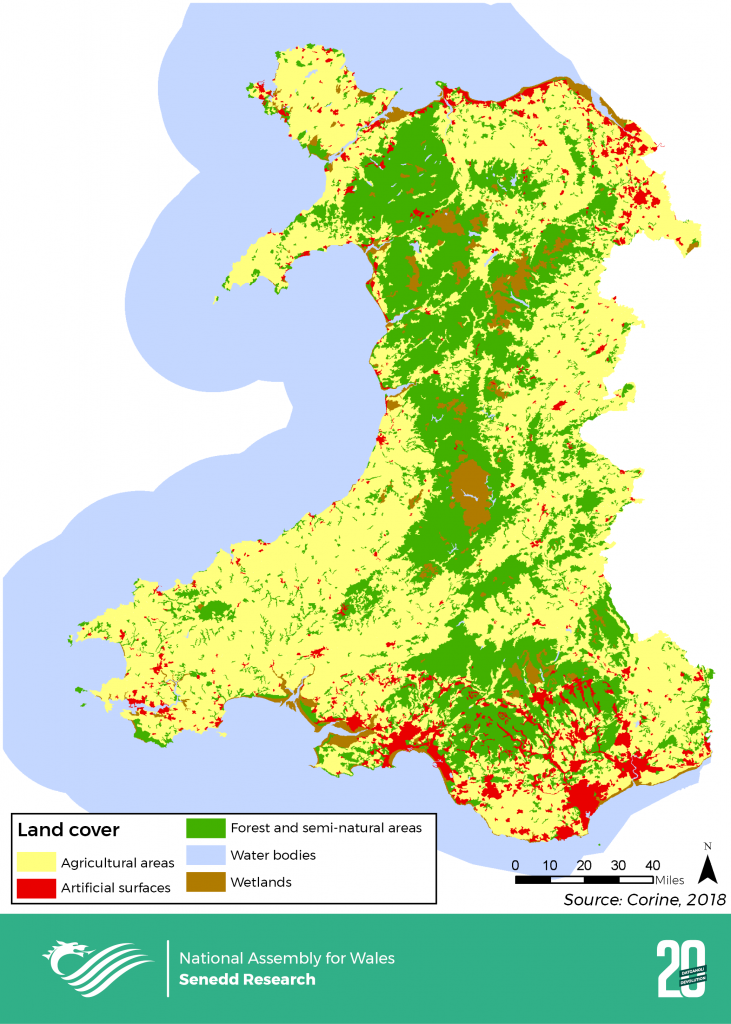 Wales is one of the least wooded countries in Europe with only about 15% of the country’s land area covered by woodland, compared to the EU average of 37%. The Welsh Government’s current strategy and five-year action plan (2015-2020) aims to increase this with a target of 2,000 hectares of new planting per annum.

Land used for agricultural purposes accounts for 90 per cent of the total land area of Wales. The landscape, soil quality and climate of Wales means that the majority of the land is restricted to the grazing of sheep and cattle, illustrated by the split of land by usage in figure 2: 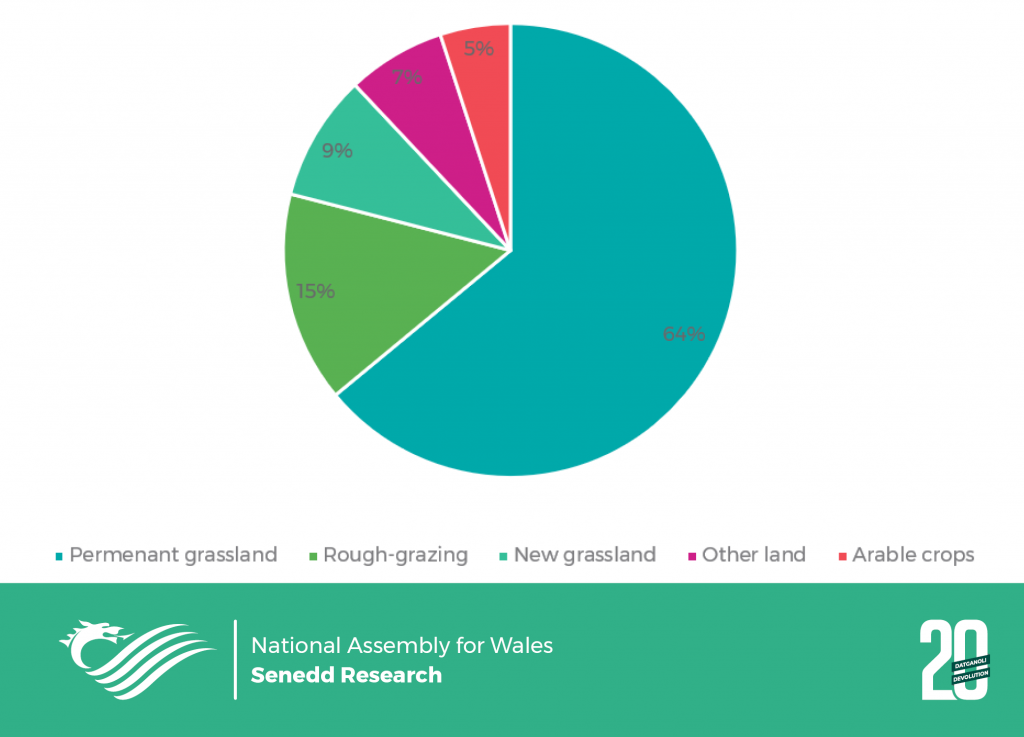 Figure 2: Split of land on agricultural holdings by usage, 2018
Source: Statistics for Wales 2018

In 2017, Welsh agriculture accounted for 3.62% of regional employment in Wales and a total gross value added of 0.59% in 2016. While the average Welsh farm business income in 2017-18 was £34,600, farm income in Wales remains heavily dependent on subsidy. However, agricultural policy across the UK is changing as it departs from the current subsidy system of the EU’s Common Agricultural Policy (CAP) that has underpinned UK farming for several decades.

Nationally important landscapes in Wales are designated as National Parks or Areas of Outstanding Natural Beauty (AONB). Together these Designated Landscapes cover around 25% of Wales, and contribute to a suite of protected areas and special sites chosen for their wildlife, their scenic beauty or value as geological sites. These include more than 1000 Sites of Special Scientific Interest (SSSIs) as the most important sites for Wales’ natural heritage, covering about 12% of the country’s surface area.

Given the importance of agriculture and the natural environment, the Assembly’s committees have shown a strong interest in the subject during the past 20 years. Enabling farmers to receive payments for farming in environmentally beneficial ways was a topic looked at by the First Assembly’s Agriculture and Rural Development Committee, and continues to be explored by the current Climate Change, Environment and Rural Affairs (CCERA) Committee.

Over 60% of the population of Wales lives and works around the coast. Welsh seas support thousands of jobs across a range of sectors and provide us with many resources.

The Welsh fishing sector is different in size and nature to that elsewhere in the UK. In 2017 there were 450 boats registered at Welsh ports and 756 fishers employed in the sector. Two-thirds of landings by Welsh vessels by value are shellfish, of which 90% are exported to the EU and to Asia via the EU’s extended trade agreements.

The sector has been shaped by the UK’s membership of the EU’s Common Fisheries Policy (CFP). However, as the UK leaves the EU, it will leave the CFP too, bringing with it the need to introduce legislation to manage its own waters, and the potential for significant changes in fisheries policy in Wales. Fisheries is a devolved matter, and as such Assembly Committees have been active in preparing for this change.

Wales has 133 marine protected areas (MPAs), the equivalent of 69% of Welsh seas. These aim to safeguard our seas and make them more resilient to change.

The CCERA Committee has explored the effectiveness of MPA management, recommending that the Welsh Government provides greater priority and leadership ‘as a matter of urgency’. In response, in 2018, the MPA Network Management Framework and Action Plan was published.

The First Assembly’s Environment, Planning and Transport Committee recommended that the then:

Welsh Assembly Government demonstrates its leadership in the field by mainstreaming biodiversity considerations into its policies and priorities, and those of sponsored bodies

Biodiversity inquiries have subsequently been undertaken by third and fourth Assembly Committees, and the biodiversity of Wales has steadily risen up the political agenda, culminating in the Environment (Wales) Act 2016 being passed by the Fourth Assembly.

Nature conservation groups produced the ‘State of Nature Report’ in 2013 and again in 2016. The overall headline for Wales is stark in that one in 14 species is heading for extinction.

The 2016 report examined a number of terrestrial species and placed Wales in the lowest fifth of the 218 countries analysed, indicating that ‘ecosystems may have fallen below the point at which they can reliably meet society’s needs’.

Trends in the abundance and distribution of certain species are shown below. The values show the percentage of species assessed that have increased, decreased or showed little change. For example, of the 30 butterfly species assessed, 50% have shown a strong or moderate increase between 2002-2013. 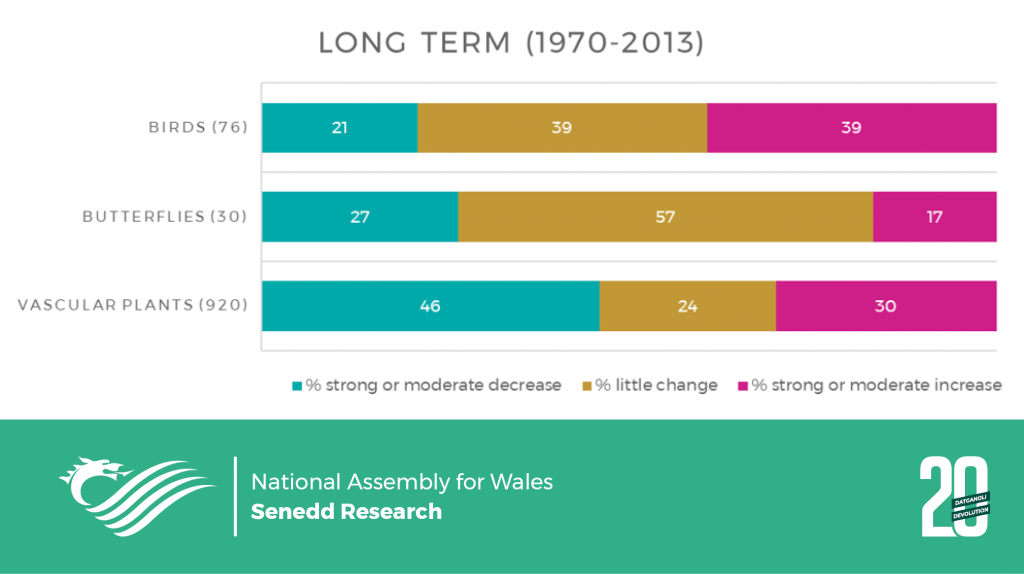 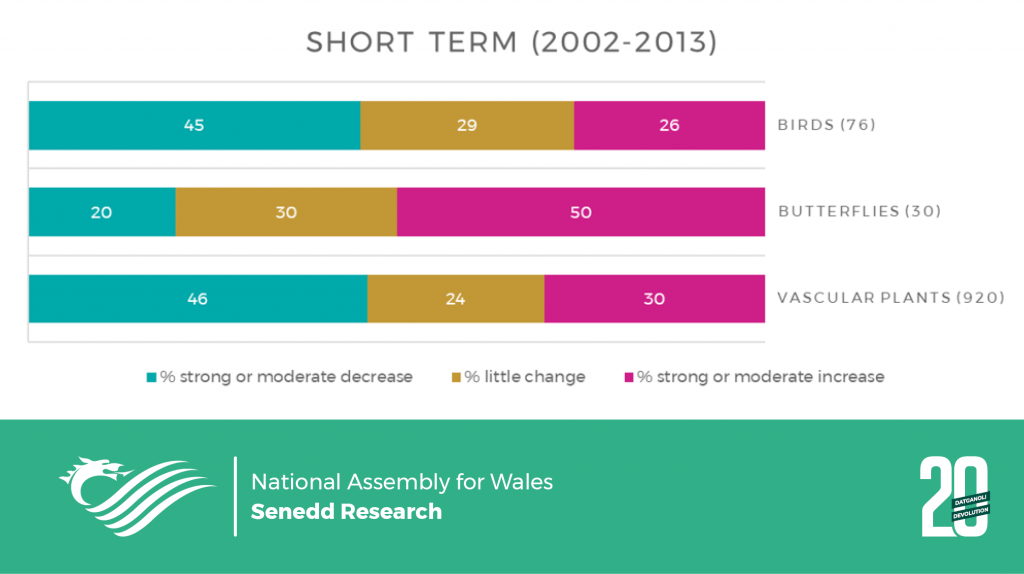 Figure 3: The percentage of species in each trend category over the long term and the short term. The values in brackets show the number of species assessed.
Source: State of Nature 2016 Wales report. 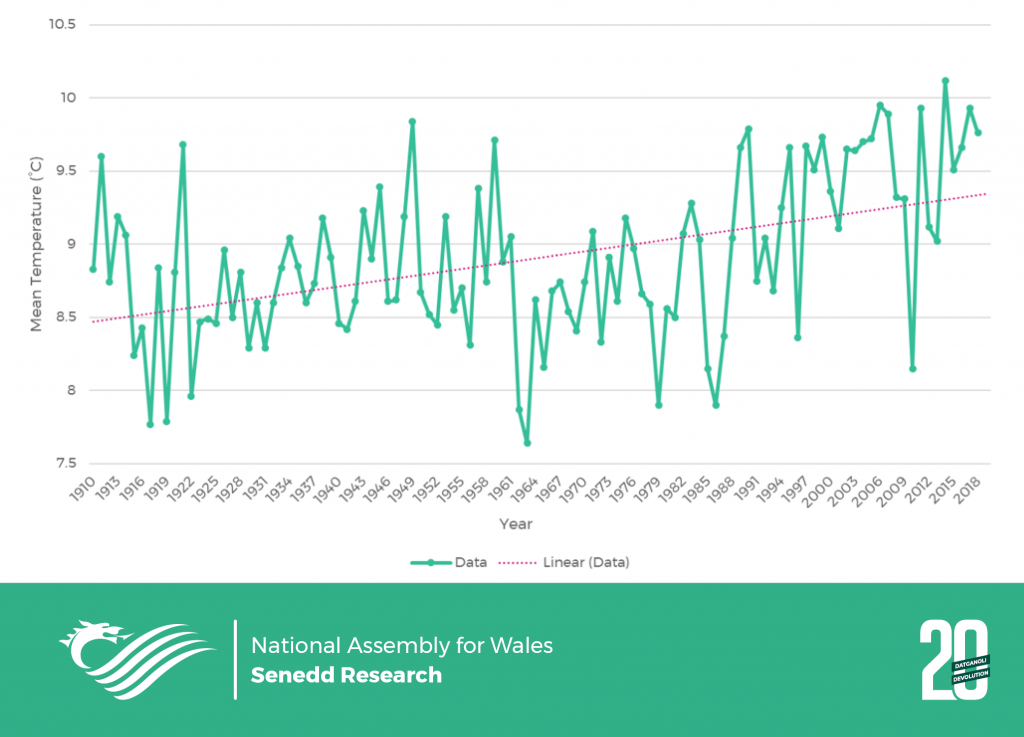 The Third Assembly Sustainability Committee was active in scrutinising the (then) Welsh Government on its progress in contributing to the UK’s carbon reduction targets. It produced a series of six reports on carbon reduction (2007-2010) which fed into the Government’s carbon reduction strategy, setting out targets of reducing greenhouse gases by three per cent year-on-year, and at least a 40 per cent reduction by 2020.

Carbon reduction continues to be high on the Assembly’s agenda, with the CCERA committee continuing to scrutinise the Welsh Government on its progress towards targets, examining the issue in its first ever climate change annual report., and holding a debate in Plenary

In June 2018, the UK Committee on Climate Change (UK CCC) published its 2018 Progress Report to Parliament. It showed that in Wales, total emissions increased by 5% in 2016, following falls in emissions in 2014 and 2015. Since 1990, emissions in Wales have fallen by 14%. Progress in Wales has been slower than the UK as whole, partly as a result of Wales having a much larger share of industry emissions.

The Environment (Wales) Act 2016 placed new duties on the Welsh Government to reduce greenhouse gas emissions by 80% by 2050, and accompanying regulations set the trajectory and approach to achieving this low carbon transition. In March 2019, the Welsh Government published Prosperity for All: A Low Carbon Wales – setting out a cross-government and cross-sector plan for emissions reduction.

On 29 April 2019 the Welsh Government declared a climate emergency in Wales, hoping this would “trigger a wave of action at home and internationally”. It has recently received advice from the UK CCC on the options Wales has for setting net zero targets for carbon emissions and other greenhouse gases in the future.

Wales continues to have some of the worst air quality in the UK - air pollution contributes to around 2,000 deaths per year. Action on climate change can help to tackle this ‘urgent public health crisis’.

Energy lies at the heart of the climate change challenge. Energy policy was scrutinised by the Fourth Assembly’s Environment and Sustainability Committee in 2012 and 2016, recommending that Wales must ‘establish a clear vision for its future energy policy’.

In 2016, the power sector was responsible for 34% of total Welsh emissions. According to the report, Energy Generation in Wales 2017, 78% of Welsh electricity generation in Wales came from fossil fuel plants in 2017, with the other 22% being generated from renewable sources.

Renewable electricity generation is increasing towards the Welsh Government’s renewable energy target of 70% by 2030,: 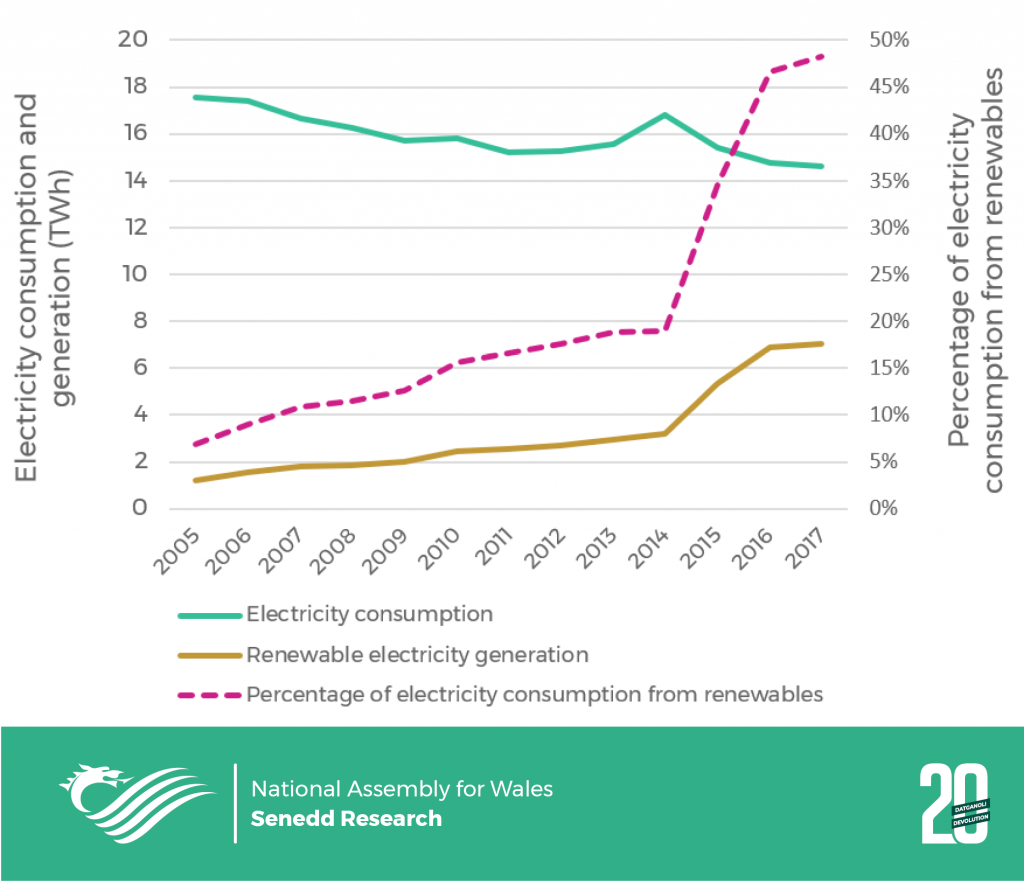 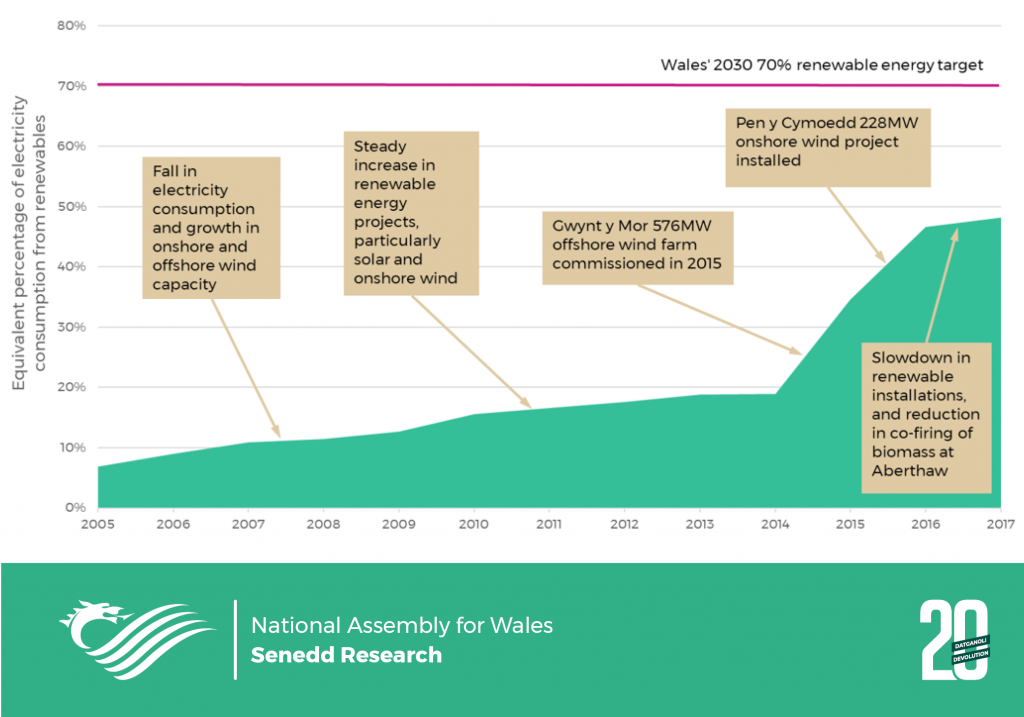 Figure 6: Growth in the percentage of electricity from renewable sources in Wales.
Source: Welsh Government Energy Generation in Wales 2017

In 2011 Wales became the first country in the UK to introduce a requirement to charge on most single-use carrier bags. This was initiated by a petition to the Assembly’s Petitions Committee, with further work taken forward by the (then) Sustainability Committee.

More recently, there has been a focus on a move towards a circular economy, where products/packaging never become waste, but contribute positively to the economy.

Our understanding of the vulnerabilities of our environment, the impacts of climate change and human action all have a role to play in the development of legislation, policy and practice moving forwards.

In particular, the impact of Brexit on agriculture and fisheries, and on the structures and principles that protect Wales’ environment will be key in the coming years.

We are yet to see what impact the WFG and Environment Acts will have, however it’s clear that significant work is needed in order to halt ecosystem decline, and to protect Wales’ biodiversity if we are to conserve and restore our environment for current and future generations.

The next article to be published on Tuesday will look at the economy.