On Wednesday 20 March the Assembly will debate the Economy, Infrastructure and Skills Committee’s report into the Welsh Government’s Mobile Action Plan. This article provides background material to help inform the debate.

5G is the next generation of mobile technology. It is expected to deliver faster and better mobile broadband, and to enable revolutionary uses in sectors such as manufacturing, transport and healthcare. But 5G is unlikely to extend coverage of mobile networks. Whilst talk turns to 5G and the possibilities it offers, 4G coverage in Wales remains lower than the UK average, and there is a debate as to whether the Welsh Government is doing enough to help it catch up.

Since the 1980s, a new generation of mobile technology has emerged roughly each decade, transforming what mobile communication is capable of. 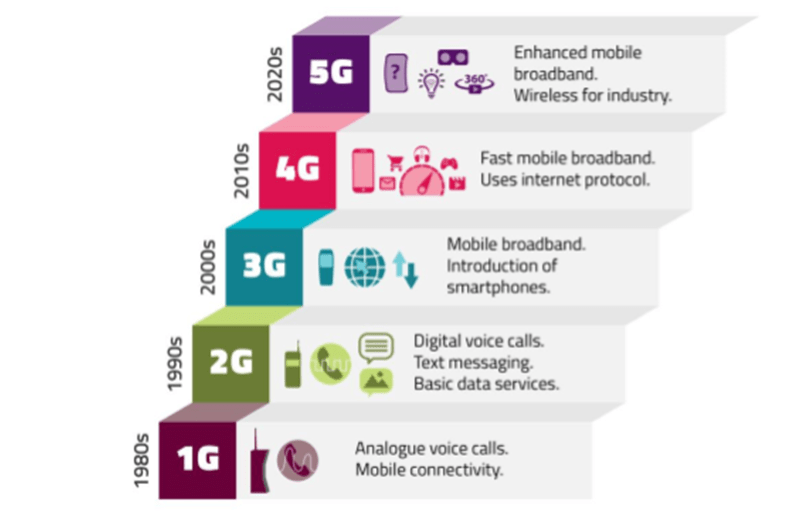 The transition from 4G to 5G will cause a massive increase in the capacity of networks, increasing the speed and stability of mobile connections. This paradigm shift is expected to usher in a host of new technologies, with possibly revolutionary applications where cutting-edge technology (such as robotics) meets the 5G network. 5G promises low latency – that is, the time between an action being performed (such as clicking a video link) and a reaction occurring (the video playing) – good news both for remote surgery and driverless cars.

In October 2018 mobile network operator EE launched the UK’s first live 5G trial in Canary Wharf. No laws are needed to be passed explicitly to enable the rollout of 5G: as with previous iterations of mobile technology, it is expected that telecommunications companies will invest in new technology based on commercial decisions.

Ofcom, the telecommunications regulator, has published a report - Enabling 5G in the UK - which looks at the steps it will take to enable 5G rollout:

The introduction of 5G will increase what can be done over mobile networks, but will not, in and of itself, increase the reach of these networks. The latest data from Ofcom shows that, across almost all the main indicators, mobile coverage in Wales lags behind the UK average.

What can be done to help Wales catch up?

Telecommunications is a reserved matter, so the power to change the rules that govern mobile network deployment rests with communications regulator Ofcom and the UK Government. Ofcom has published a guide outlining how it intends to improve mobile coverage in the UK. For example, its plans to auction off the 700 Mhz and 3.6-3.8 GHz spectrum bands include geographic coverage obligations for each of the UK nations.

Since 2017, the Welsh Government has had a Mobile Action Plan. This focuses on how it will use its devolved powers – such as the planning system and business rates relief – to stimulate investment in mobile networks.

The Assembly’s Economy, Infrastructure and Skills Committee recently published a report into the Welsh Government’s action in this area. Although mobile coverage has increased in Wales since 2017, the Committee said that the role the Action Plan had played in this improvement was “unclear”. The Committee called for the Welsh Government to use its devolved levers “to potentially tip the scales of commercial viability in favour of further investment in some areas”.

One of the key recommendations in the report was that the Welsh Government should allow higher masts under the permitted planning regime. Permitted development allows certain development – such as building masts - to take place without being subjected to a full planning application process.

This regime is currently more lenient in England and Scotland than it is in Wales. This does not mean that masts taller than those allowed under permitted development cannot be built in Wales: just that to do so they must go through a more rigorous planning process.

The Welsh Government has since agreed to increase the height of masts that will be allowed under permitted development, to make them in line with the rest of Britain. When these proposed changes come into effect in April, mobile network operators will be able to deploy bigger masts more cheaply.

What plans does the Welsh Government have to make Wales 5G ready?

This planning change should hopefully improve mobile coverage in rural Wales. But, it is unlikely to directly help 5G rollout, as 5G networks are likely to see much greater deployment of small base stations, making mast height less of an issue.

5G deployment will usher in another set of public policy challenges – including seeking coordination between the many parties - from local authorities to shops, property owners and utilities – who own the assets on which mobile network operators want to site their equipment.

In a previous inquiry, the Economy, Infrastructure and Skills Committee investigated Welsh readiness for the “fourth industrial revolution”, as new technology – such as automation and 5G networks – is predicted to transform the nature of the economy.

In its response, the Welsh Government said that it has commissioned digital business growth agency Innovation Point to “advise on, stimulate and exploit opportunities in the emerging 5G landscape”. Innovation Point has assembled an expert advisory group to help “prepare and shape a coherent national 5G programme”.

One thing clear from the rollout of previous iterations of mobile technology it is that as technology progresses, gaps in coverage persist – both between Wales and other UK nations, and between rural and urban areas within Wales. Public intervention – at a Welsh and UK level – will be needed if Wales is not to fall further behind as 5G networks emerge.