How might different Brexit scenarios affect the Welsh economy?

The economic impact of Brexit has been a major area of media and political attention. It is the focus of the last of our three blog posts ahead of the Assembly’s vote on the EU Withdrawal Agreement and Political Declaration on 4 December. We have previously published articles on what the Withdrawal Agreement and Political Declaration mean for Wales.

The UK Government published its long-term economic analysis for EU exit on 28 November, ahead of the ‘meaningful vote’ on the EU Withdrawal Agreement and Political Declaration in the UK Parliament scheduled for 11 December. This estimates the impact of a number of different Brexit scenarios on the UK’s Gross Domestic Product (GDP) in comparison to EU membership over a 15 year period.

The Bank of England also published analysis of the impact of different Brexit scenarios on the UK’s monetary and financial stability on 28 November.

While economic forecasts are based on evidence and modelling, they are also subject to uncertainty as they rely on a number of assumptions. To reflect this uncertainty, forecasts typically provide a range of potential impacts.

This article sets out the conclusions of the UK Government and Bank of England analysis, highlighting key findings in relation to Wales from these and other sources.

What are the key findings from the analysis by the UK Government and Bank of England?

The UK Government’s analysis provides estimates of the economic impact of four potential Brexit scenarios in comparison to EU membership. These are:

The UK Government has also conducted sensitivity analysis of the uncertainties around potential effects of the policy set out in its White Paper, where non-tariff barriers are half way between the White Paper and FTA scenarios.

The UK Government found that, while the UK economy would be expected to see overall growth over the 15 year period under all potential scenarios, in all of the Brexit scenarios modelled UK GDP would be lower than under the current arrangements. The figures in the table below are estimates of the percentage change in UK GDP and GDP per head from what they would otherwise have been in approximately 15 year's time under current arrangements.

Figure 1: UK Government estimated impact of Brexit scenarios on total UK GDP and GDP per head over a 15 year period

Figure 2: Bank of England analysis of the impact on UK GDP of different Brexit scenarios 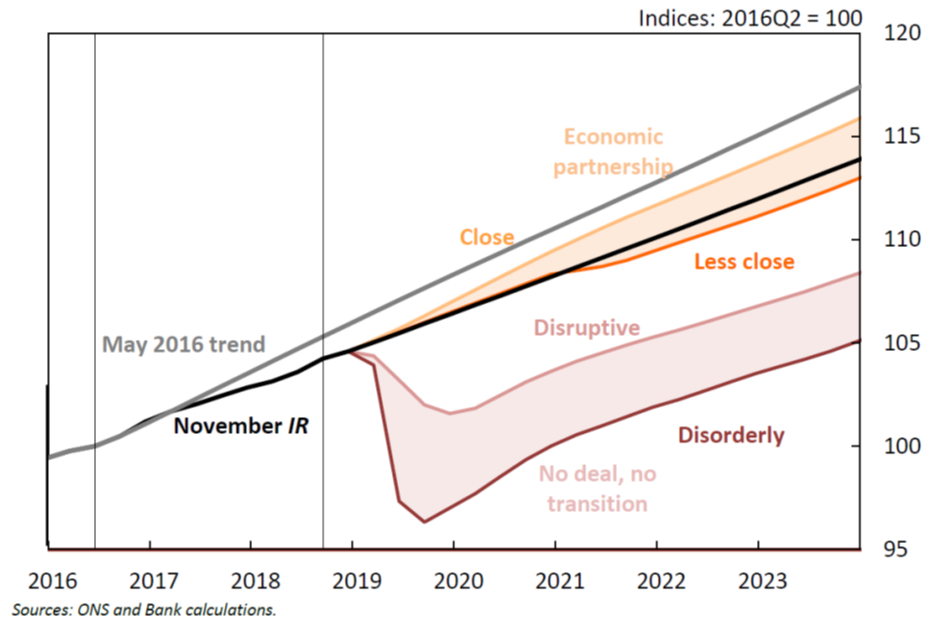 The Institute for Government’s report, Understanding the Economic Impact of Brexit, examines 14 studies on the long-term economic impacts of Brexit, which project how the UK economy is likely to be affected by Brexit until 2030. The report attempts to make clear the assumptions that different studies have made, what evidence they have to support them, and why this leads to such diverse conclusions about the possible economic consequences of Brexit for the UK economy.

What does the UK Government’s analysis say about Wales?

The UK Government analysis also considers the impact of the different Brexit scenarios for the UK nations and English regions. However, this only takes into account changes as a result of trade policy, and do not consider the potential economic impacts of changes to migration arrangements or regulatory flexibilities. As can be seen from the previous section of the blog, the UK Government’s modelling suggests that if there is less migration into the UK from EEA workers, both total GDP and GDP per capita will be lower than if there is no change to migration arrangements in all of the Brexit scenarios identified.

The UK Government states that in a ‘no deal’ scenario Wales would see a sizeable reduction in its Gross Value Added (GVA), as Wales’ larger share of manufacturing would be particularly affected by this scenario. However, in a scenario where the UK Government White Paper policy reflects the UK’s trading arrangements, it states that this would result in moderately lower GVA for Wales than under EU membership as Wales has a relative specialisation in the energy sector. This is expected by the UK Government to perform well under the White Paper scenario, creating a smaller impact for Wales than other parts of the UK.

Figure 3: UK Government estimated impact of Brexit scenarios on Gross Value Added of devolved nations and English regions over a 15 year period (not taking into account changes in migration arrangements and regulation) 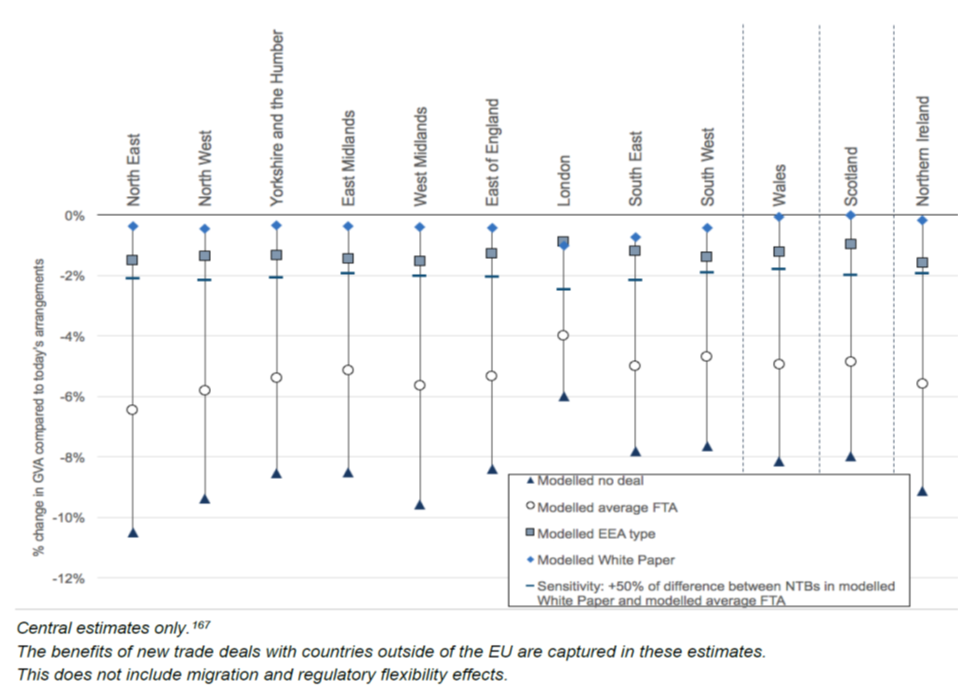 The UK Government’s initial estimate of the economic impact of Brexit scenarios on the devolved nations and English regions set out in the EU Exit Analysis: Cross-Whitehall Briefing from January 2018 also sets out estimates of the impact of various scenarios on GVA. This did consider factors such as migration and regulation, however it did not consider region-specific effects of customs arrangements or supply chain effects. It also did not analyse the impact of the UK Government’s White Paper policy.

What other analysis has been undertaken on the economic impact of Brexit on Wales?

The Welsh Government commissioned Cardiff Business School to examine the impact of Brexit on large and medium-sized firms in Wales. This found the following risks associated with Brexit for different sectors in the Welsh economy, and that high value industries with a large presence in Wales – such as aerospace and automotive – are most exposed to threats coming from Brexit, as they are highly-regulated and involve complex, cross-border supply chains.

Figure 4: Summary of Brexit-related risks identified by Cardiff Business School for large and medium-sized businesses in sectors of the Welsh economy

Our previous blog post in July 2018 highlighted that the UK Government’s trade proposals in its White Paper may mitigate these threats, given that they would maintain the status quo for trade in goods: zero tariffs and continued regulatory alignment between the UK and the EU in this area. However, the extent to which these proposals will form the future trading relationship between the UK and EU is currently not known as this will be negotiated after the UK leaves the EU.

Additionally, Professors Perdikis and Khorana undertook a fellowship with the Assembly looking at the likely economic impact of Brexit. They concluded that:

The scenario simulations reveal that Brexit will lead to the imposition of costs, either through the imposition of tariffs or the loss of preferential access to the single market. The impact on the Welsh economy will be felt via reductions in GDP, GDP per capita, trade, investment and employment. The least costly outcome for Wales is if the status quo can be held to for as long as possible. The next best or next least worst is the conclusion of a CETA type agreement by the EU. The most costly is a Brexit based on WTO rules.