What are the next steps for regional investment in Wales?

Wales receives the most per head in Structural Funds of any of the devolved nations and English regions, and will receive £2.1 billion in Structural Funds between 2014-20. Therefore, securing continued investment once the UK leaves the EU is of key importance. The Cabinet Secretary for Finance, Mark Drakeford AM, will be making a Plenary statement on the next steps of the Welsh Government’s proposals for regional investment after Brexit on 16 October. 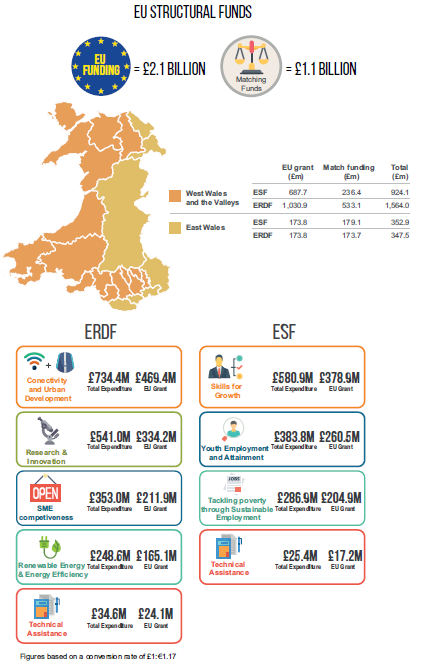 What are the Welsh Government’s proposals for regional investment in Wales?

Regional Investment in Wales after Brexit, published in December 2017, sets out the Welsh Government’s plans to deliver future regional investment. The Welsh Government believes it is best placed to lead on shaping future regional policy for four reasons. These are that it has delivered EU Structural Funds in Wales for the past 20 years; has the presence required across Wales; has partnerships in place across Wales with local government, the private sector and the third sector; and is responsible for other regional policy levers such as skills and infrastructure.

It is opposed to a centralised UK Shared Prosperity Fund, and suggests that a UK-led approach would potentially mean less funding for the poorest areas in Wales and would not respect the devolution settlement given that economic development is a devolved area.

In relation to funding for regional investment, the Welsh Government has also called for the UK Government “to ensure that Wales is not a penny worse off as we leave the EU.” The Cabinet Secretary for Finance has said that this would then be ring-fenced by the Welsh Government for spending on regional economic development.

While the Welsh Government intends to keep some elements of Structural Funds such as multi-year funding and partnership working, it also intends to do some things differently after Brexit. The Cabinet Secretary for Finance has set out areas where he sees a new approach is required:

The Welsh Government subsequently consulted on this approach, publishing an engagement report in July 2018 which analysed responses from stakeholders.

What has the UK Government said about the UK-wide Shared Prosperity Fund, and what does this mean for Wales?

Whether the Welsh Government will be able to fully implement its proposals depends on the extent to which it secures responsibility for managing and administering the proposed UK-wide Shared Prosperity Fund in Wales. It is currently unclear whether this will happen.

There is limited information available about the UK Government’s plans for its Shared Prosperity Fund, with further details to follow by the end of 2018. Decisions on the operation and allocation of this fund will be made following the consultation and will be subject to the spending review to be held in spring 2019.

In a written statement in July 2018 the Secretary of State for Housing, Communities and Local Government, James Brokenshire MP, gave an update on proposals, stating that:

In an interview by BBC Wales on 30 September, the Prime Minister, Rt Hon Theresa May MP, was asked about the level of funding and devolution of the UK-wide Shared Prosperity Fund that Wales could expect after Brexit. She responded that:

The point of the shared prosperity fund is that we will be looking at issues of disparities between the nations of the UK - disparities within nations and regions and deciding expenditure of money so that we are ensuring that money is being spent as effectively as possible to deliver for people...

What have Assembly Committees said about the future of regional investment?

In June 2017, the External Affairs and Additional Legislation Committee published its report on the future of regional policy. The Welsh Government accepted 15 of the Committee’s 17 recommendations, and accepted the other 2 in principle. Last month, the Finance Committee’s report into replacing EU funding streams made a number of recommendations in relation to regional investment through the UK Shared Prosperity Fund. Both Committees made similar recommendations in the following areas:

The Finance Committee also recommended that: