During the Fourth and Fifth Assemblies (2011 onwards), the Welsh Government has sought to protect funding for schools in successive budget setting rounds. In 2018-19, it provided funding aimed at maintaining local government funding for schools budgets at existing levels, avoiding potential reductions.

In Wales, maintained (ie state funded rather than independent/private) schools are funded via local authorities, which receive the majority of their funding through the Welsh Government’s annual local government budget. In addition to its approach of seeking to protect school budgets within the local government settlement, the Welsh Government has pledged an additional £100 million from the Department for Education budget in the Fifth Assembly for raising school standards.

This Research Briefing also provides data on the levels of schools’ reserves as well as providing some policy context to the extent to which school budgets have been protected in Wales. 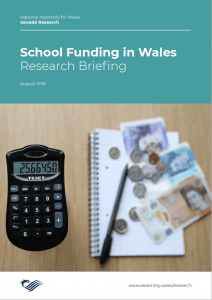