The fisheries industry accounts for just 0.05% of UK GDP, however it featured prominently in the Brexit leave campaign. Since 23 June 2016 there have been few developments in what post-Brexit fisheries legislation will look like. With less than a year to go until ‘exit day’, the Welsh Government will bring forward a Plenary debate on 03 July to discuss ‘Brexit and Welsh Fisheries’.

This blog gives a brief overview of Welsh fisheries and developments so far in the Brexit negotiations.

The Welsh fishing sector is different in size and nature to that elsewhere in the UK. Welsh fisheries operate in inshore (0-6 nautical miles (nm)), and territorial (6-12nm) waters and are vessels are typically small scale (less than 10m), and lack the ability to fish for long periods in the offshore region or fish on the high seas.

The Welsh fleet mainly targets shellfish and other ‘non-quota’ species. A recent blog by Cardiff University, The Future of Welsh Fisheries states:

Two-thirds of landings by Welsh vessels by value are shellfish, of which 90% are exported to the EU and to Asia via the EU’s extended trade agreements.

According to the Marine Management Organisation’s annual sea fisheries statistics for the UK (2016) there were 451 boats registered at Welsh ports and 753 fishers employed in the sector in 2016. Of these, 419 boats were under 10 metres and only 32 boats were over 10 metres.

In contrast there were 3,098 fishing vessel registered in England and 5,306 employed in the sector.

The Welsh Government’s January 2017 White Paper Securing Wales’ Future commits to delivering a ‘forward looking’ fisheries policy, however there is a danger of Wales being drowned out of the policy debate. A recent report by the Wales Centre for Public Policy (WCPP), Implications of Brexit for Fishing Opportunities in Wales, states:

The structure of the Welsh fleet is unique and there is a real risk of it being ‘left behind’ by the demands of larger fishing interests in the UK-EU negotiations.

The CFP uses a number of different measures to manage fish and shellfish stocks in EU Member States’ Exclusive Economic Zones (EEZs) as shown below (EEZs extend from 12-200nm or out to the median line between two countries), including catch limits, quotas and technical measures. A February 2018 Parliamentary Office of Science and Technology PostNote summarises the science used ‘to inform management, current approaches to EU fisheries, and challenges and opportunities for future UK management of fisheries’. 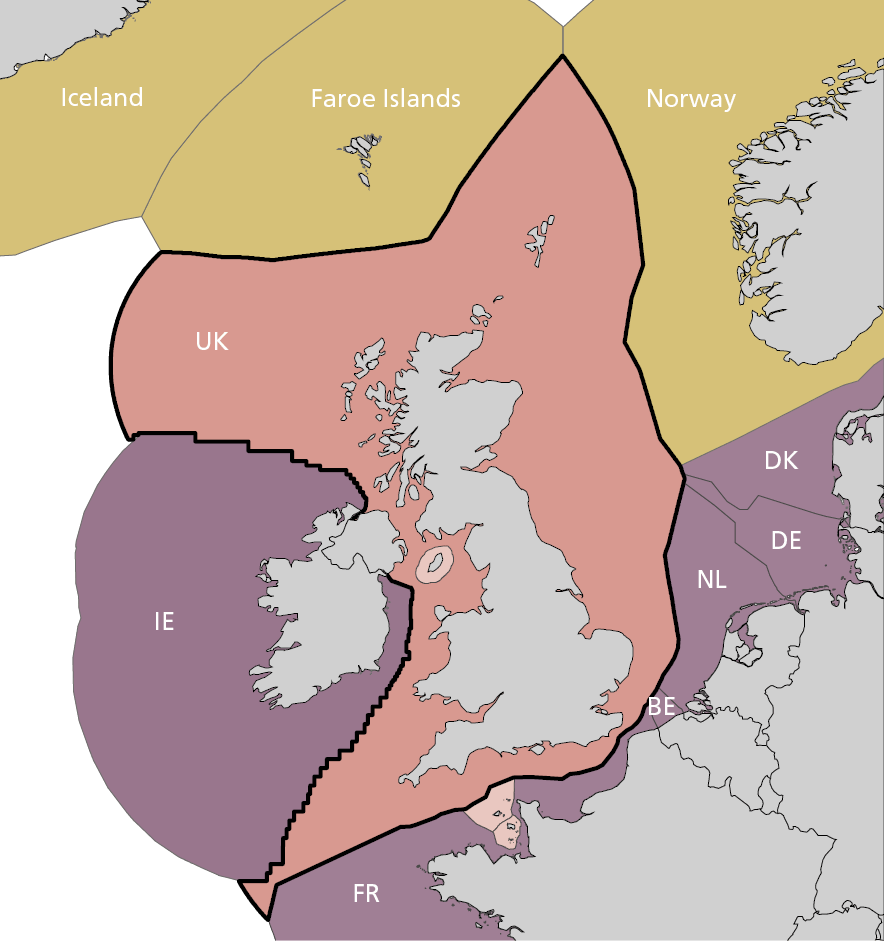 The Exclusive Economic Zones of the North East Atlantic

Currently CFP quota is allocated to the UK as an EU Member State. The quota is then allocated to the devolved administrations according to a Concordat Agreement. The Welsh Government is responsible for implementing the CFP in Welsh waters.

Prior to the development of the CFP, foreign fleet access to UK and certain other European Countries’ waters was overseen by the London Fisheries Convention 1964. The Convention is not EU law, it was superseded by EU law, and currently remains in place alongside the CFP.

Upon leaving the EU, the UK will regain control over the UK EEZ. The UK will become an independent coastal state, confirmed by the Minister for Agriculture, Fisheries and Food, George Eustice, on 26 April 2018. It will remain bound by the United Nation Convention on the Law of the Sea (UNCLOS) which compels the UK to manage fish stocks in a sustainable manner. A House of Lords European Union Committee report, Brexit: Fisheries, states:

…UNCLOS III was adopted in 1982 and regulates activities at sea. It grants states the sovereign right to govern their respective …EEZs, though in recognition of the vulnerability of fish as a natural resource, UNCLOS obliges countries (‘coastal states’) to manage their living resources in a sustainable manner. For fish stocks that occur in the EEZs of two or more coastal states (‘shared stocks’) there is an obligation to co-operate on their management.

On 21 June 2017 in the Queen’s Speech, the UK Government announced its intention to introduce a UK Fisheries Bill. The associated background briefing states that the purpose of the Bill is to “enable the UK to control access to its waters and set UK fishing quotas once it has left the EU.”

The Bill is expected to establish a new fisheries management system once the UK leaves the CFP and becomes an independent coastal state.

On 2 July 2017 the Defra Minister, Michael Gove, announced the UK Government’s intention to withdraw from the London Convention on the basis that, while leaving the EU would mean the UK is no longer bound by the CFP, the Convention would still apply. The Defra press release states:

In response (PDF 146KB) to the report’s recommendation that it “provide information on the status and scope of its planned legislation on agriculture and fisheries”, the Welsh Government said:

On 28 April 2018, George Eustice confirmed plans to introduce a UK Fisheries Bill in this session of Parliament.

The fishing industry has been heavily shaped by the UK’s membership of the EU and the frameworks that currently regulate fisheries policy through the CFP. This allows for an intra-UK as well as EU-level coordinated approach with the rationale that frameworks are required for the functioning of the EU Single Market and for the harmonisation of policy objectives. As we leave the EU there has been much debate around how frameworks should be established at a domestic level, especially for areas of devolved competence.

There is general agreement on a need for UK common frameworks in certain areas, including fisheries management, which is an area of devolved competence. On 9 March the UK Government published its provisional assessment of where common UK frameworks might be required after Brexit in areas of EU law within devolved competence.

The development of UK frameworks has been covered in more detail in our Brexit Monitoring Report: Environment.

In her Mansion House speech on 2 March the Prime Minister, Theresa May, said the UK would cooperate with the EU on the shared management of fisheries stocks and wanted to agree on reciprocal access to waters. On 14 March the European Parliament adopted its position on the framework for a future relationship between the EU and the UK. It states:

On 23 March the European Council adopted its negotiation guidelines on the framework for the future EU-UK relationship. The guidelines outlined that a future Free Trade Agreement (FTA) between the EU and UK should include reciprocal access to fishing waters.

On 9 April the European Commission published a Brexit preparedness briefing on fisheries and aquaculture.

The UK will continue to abide by the rules and regulations of the EU for the entirety of that period including any new regulations that come into force during those years. This means that the UK will continue to participate in the CFP until December 2020. The UK will be consulted on the annual allocation of fishing quota during the transition period and could be invited to participate in any EU delegations negotiating fishing rights with third-party countries.

The UK will also continue to have access to the Single Market and Customs Union on the same terms as it has as a Member State.