The Health Foundation report ‘The path to sustainability: Funding projections for the NHS in Wales to 2019/20 and 2030/31’ noted that the NHS in Wales is in “the most financially challenging period in its history”. The Welsh Government has prioritised its funding, allocating an increasing proportion of its budget on health. The Welsh Government’s budget for 2018-19 allocated half of its total discretionary revenue funding for the ‘Delivery of Core NHS Services’.

The Committee issued a call for evidence to all LHBs in May 2018 with Members also taking oral evidence from LHBs and Welsh Government in July 2018 in respect of the performance of NHS Wales against the new statutory financial duties:

Have LHBs and NHS Trusts met the first financial duty?

What is the first financial duty? A requirement on LHBs to manage their resources within approved limits over a three-year rolling period.

The first three-year period began on 1 April 2014 and ended at 31 March 2017. Performance against the first statutory duty was reported in the 2016-17 annual accounts of LHBs and NHS Trusts in Wales. These showed that all NHS Trusts and three LHBs operated within their revenue spending allocations over the first three-year period. The remaining four LHBs did not and hence, they failed to meet the first statutory financial duty. The aggregate position for all LHBs was a net overspend of £253 million.

The annual accounts for 2017-18, which were laid before the National Assembly for Wales on 14 June 2018 show that LHBs performance in the three years to 31 March 2018 mirrored that in the first three-year period, with the same LHBs either meeting or failing to meet the first statutory financial duty and all NHS Trusts operating within their revenue spending allocations.

Overall, LHBs have reported a deteriorated financial position, with the net overspend increasing over the three years to £365 million. The performance by individual LHBs is shown below. 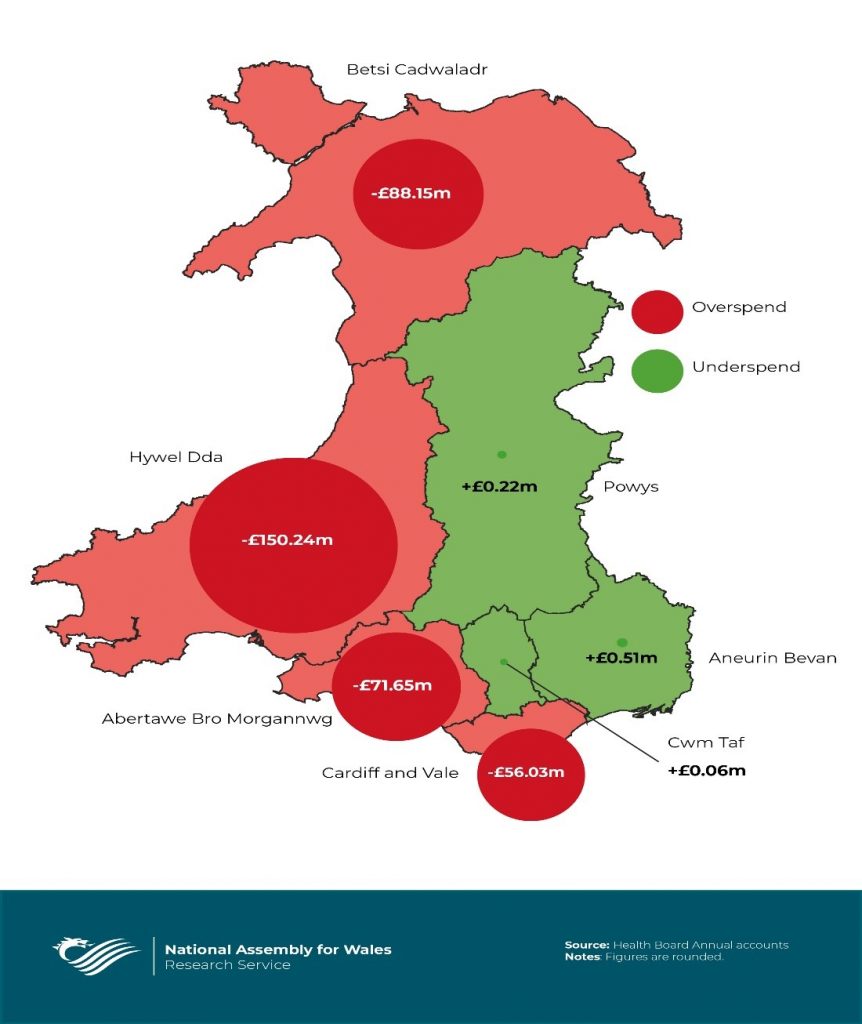 While the value of overspend across the period has increased at all LHBs that did not meet the first statutory financial duty, the annual financial performance at individual LHBs has varied. Betsi Cadwaladr University Health Board and Hywel Dda University Health Board have reported increasing overspends year-on-year. Both Abertawe Bro Morgannwg LHB and Cardiff and Vale University Health Board reported overspends in 2016-17 having operated within their revenue spending allocations in 2015-16. While they did not meet the first statutory financial duty again in 2017-18, their financial performance has improved marginally i.e. the value of their reported deficits for the 2017-18 financial year are less than they were in 2016-17.

Have LHBs and NHS Trusts met the second financial duty?

What is the second financial duty? Requires that each LHB prepares and has approved by Welsh Ministers a rolling three-year Integrated Medium Term Plan (IMTP).

The annual accounts for NHS bodies in Wales from 2016-17 onwards report whether LHBs and NHS Trusts have met the second financial duty. The position for individual LHBs in each of the three years to 31 March 2018 is summarised below. A summary of the performance by NHS Trusts against the first and second statutory financial duties is also provided. 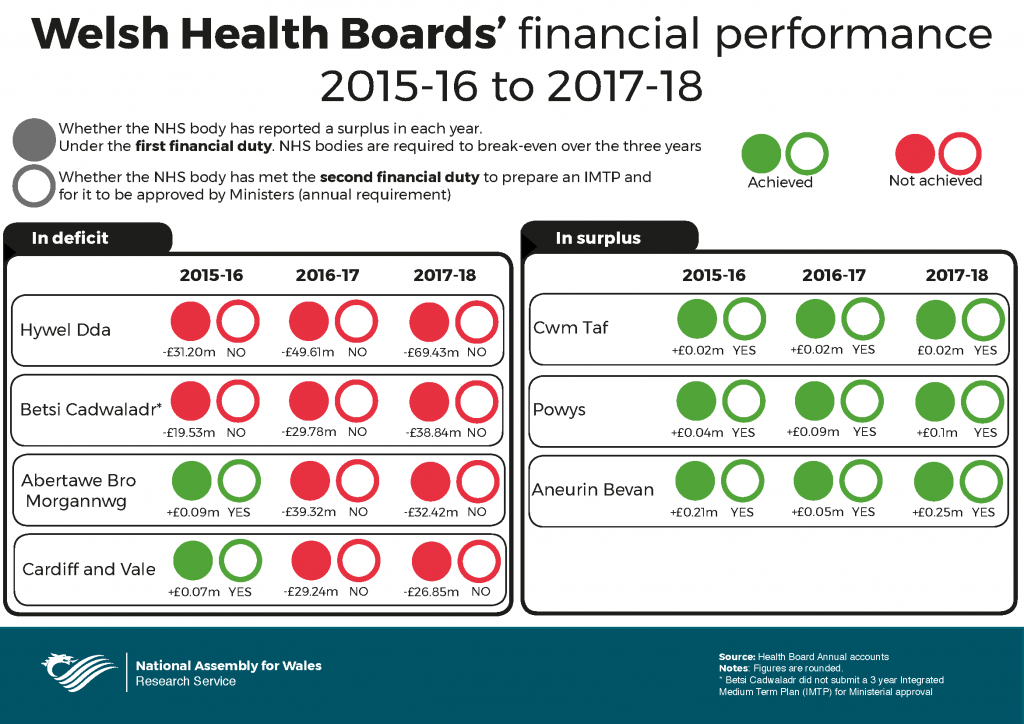 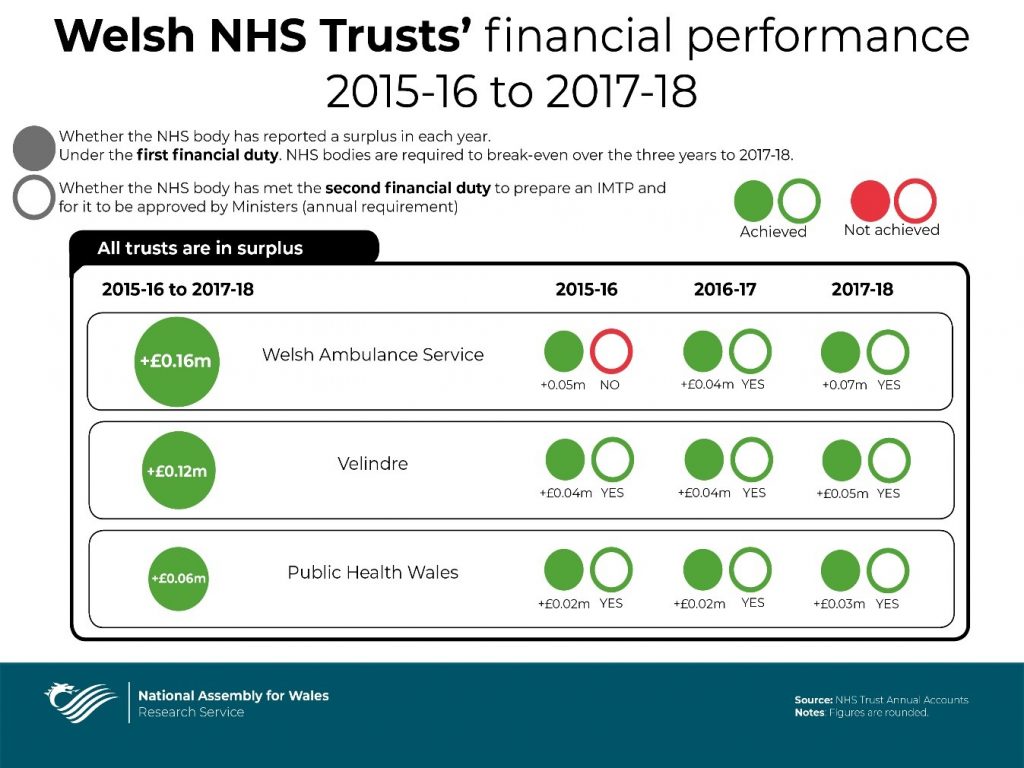 What is the story so far?

… it’s quite important, in terms of the ability of these organisations to get back to a sustainable position, and then for us to judge when we think that they are capable of managing within their resources, and any decisions that we would want to make around repaying deficits or the support around that.

The Public Accounts Committee has continued its scrutiny of the financial performance of NHS Wales. It wrote in October 2017 to the Director General Health and Social Services/NHS Wales with its observations from its scrutiny sessions in respect of performance in the first three-year period under the 2014 Act. The letter raised concerns about an over-reliance on in-year funding, which the Committee previously noted, and the importance of sharing good practice by the Health Boards.

On 14 June 2018, the Cabinet Secretary for Health and Social Services, Vaughan Gething AM, issued a written statement about NHS financial performance in 2017-18. This noted that officials were monitoring the delivery of actions identified in the independent financial governance reviews, which had been commissioned by Welsh Government in respect of all LHBs that failed to break-even in the first three-year period.

The written statement also noted that additional funding had been awarded to Hywel Dda LHB following the findings of a zero based review of its cost base. The Cabinet Secretary stated that these additional monies “places the Health Board on a fair funding basis going forward compared to other health boards and provides a sound footing for the Board to develop and transform services”.

The 2017-18 accounts show that balancing the books remains a challenge for some health boards. In his Statement to Plenary on 12 June 2018, the Cabinet Secretary for Health and Social Services set out the Welsh Government’s long term plan for health and social care.

This new ‘long term plan’ responded to recommendations set out in ‘the Parliamentary Review of Health and Social Care Final Report – A Revolution from Within: Transforming Health and Care in Wales’. The question is whether, in transforming services while meeting increased demands, a fiscally sustainable NHS is achievable?