Making sustainable places: What role can the planning system play?

Placemaking is at the heart of the Welsh Government’s new approach to planning. But what is placemaking and what does it mean in a Welsh context?

The Cabinet Secretary for Energy, Planning and Rural Affairs, Lesley Griffiths, emphasised the importance of placemaking when she launched consultations on two major national planning documents earlier this year – a revised Planning Policy Wales (PPW) (12 February) and the preferred option for the National Development Framework (NDF) (1 May).

Placemaking will again be the subject of discussion in the Assembly on 15 May 2018, when Members debate the “role of the planning system in placemaking”.

PPW is being reworked to take account of the Well-being of Future Generations (Wales) Act 2015. This means that planning policies, proposals and decisions will need to seek to support the well-being of people and communities. This should be done through aiming to achieve the seven well-being goals, and by using the five ways of working, as required by the Act.

The intention is to create sustainable places, and the Welsh Government sees placemaking as the way to achieve this:

The planning system should create Sustainable Places which are attractive, sociable, positive, secure, welcoming, healthy and friendly. Development proposals should bring people together and make us want to live, work and play in areas with an unmistakable sense of place and well-being creating prosperity for all.

The draft PPW says that placemaking is an inclusive process, involving all those with an interest in the built and natural environment. It considers issues at all levels, from the global scale, such as climate change, to the local scale, such as amenity impact on neighbours.

The draft PPW introduces five “key planning principles” and a suite of “sustainable placemaking outcomes” to help the planning system deliver sustainable places. The five key principles should be the starting point for “all those involved in considering what they are trying to achieve”. The five principles are:

The placemaking outcomes are described on pages 19 to 22 of the draft PPW (PDF 4MB). All planning policies and development proposals must seek to deliver development that “addresses” the outcomes.

The new approach is visualised in this graphic: 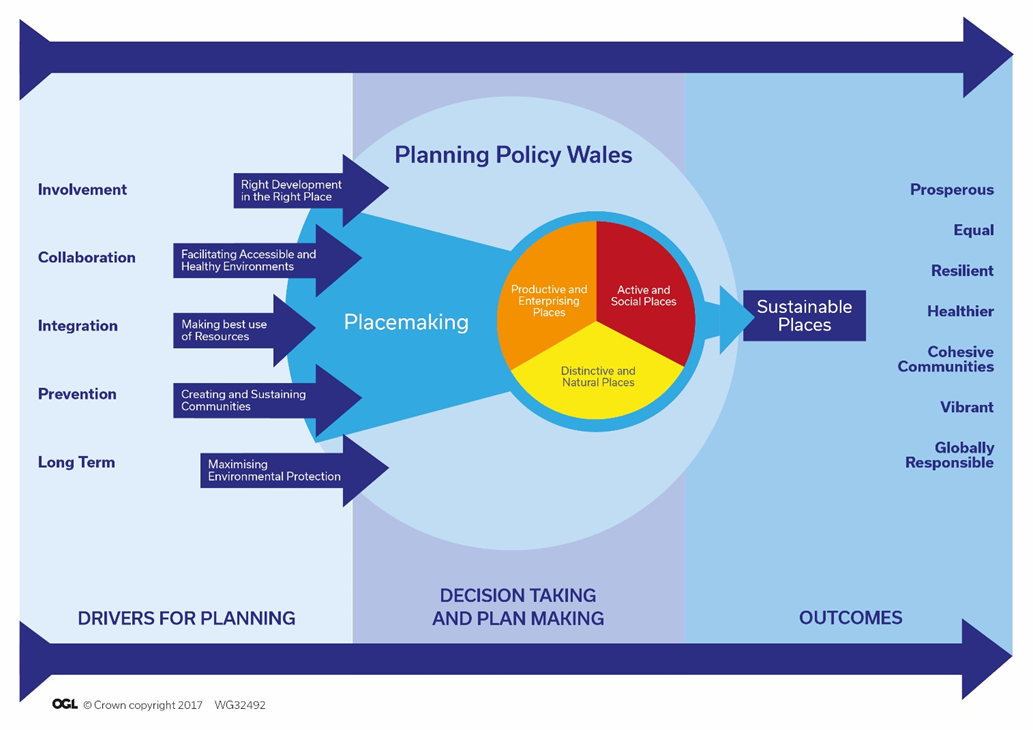 The draft PPW goes on to discuss a number of other themes within placemaking, for example encouraging good design (including the use of Design and Access Statements), promoting healthier places, supporting the Welsh language, managing urban boundaries and new settlements, and how placemaking should work in rural areas.

Place Plans are also discussed – these are non-statutory documents that can be initiated by local communities as a way to promote collaborative action and placemaking. They should support delivery of the Local Development Plan and are adopted as supplementary planning guidance.

What does the National Development Framework preferred option say?

… supporting positive placemaking and ensuring that our spatial choices direct development to the right places, make the best use of resources, create and sustain accessible, healthy communities, protect our environment and support prosperity for all.

This is in keeping with the five key principles set out in the draft PPW, with the added aspiration of supporting prosperity for all. The NDF preferred option (PDF 3.91MB) goes on to say:

To support the delivery of sustainable places, the NDF will embed placemaking into the heart of the development planning system. The NDF will focus on three spatial aspects of the Placemaking theme – decarbonisation and climate change; health and well-being; and cohesive communities and the Welsh language.

The NDF preferred option consultation runs from 30 April to 23 July 2018.

What do others say about placemaking?

Placemaking is not a new concept and the term is often understood differently in different contexts. The approach emerging in Wales is unique in that it is driven in the main by the Well-being of Future Generations Act.

Both the RTPI and the Town and Country Planning Association (TCPA) have a number of publications that focus on different elements of placemaking.

The RPTI’s publications cover issues such as tackling poverty (PDF 1.97MB), dementia and planning, healthy cities and gender and planning. The RTPI blog also includes a number of relevant posts.

The TCPA has published a series of guidance notes to encourage good placemaking. The guidance is centred on delivering new garden cities and includes the following topics: energy and climate change (PDF 3.70MB), homes for all (PDF 963KB), art and culture (PDF 3.69KB), healthy environments and green and prosperous places (PDF 6.03MB).

The Design Commission for Wales promotes good design for the built environment and supports local planning authorities and developers to achieve this. It has published Places for Life which explores “the connection between the places where we live and our health, well-being, relationships, access to work, social life, and impact on the environment”.

Renowned Danish urban designer Jan Gehl promotes building cities at the human scale. In this TEDx Talk he discusses “good urban habitat for homo sapiens”: The current London Plan emphasises “place shaping” and includes policies in areas such as “lifetime neighbourhoods”, inclusivity and designing out crime. The new draft London Plan is taking a different approach; it introduces the concept of “good growth” which it describes as “growth that is socially and economically inclusive and environmentally sustainable”.

The Project for Public Spaces is a global placemaking initiative focusing on the public realm. Overseas cites with a strong culture of urban placemaking include Auckland, Portland, Vancouver and Melbourne.