Spring 2018 sees consultations on two major planning policy documents which will frame how the Welsh planning system will work for the foreseeable future.

The NDF will set out a 20 year land use framework for the whole of Wales and will direct the development plans that sit below it – Strategic Development Plans (SDPs) and Local Development Plans (LDPs). It will also support decisions on large scale infrastructure projects through the Developments of National Significance (DNS) process.

The final NDF is due to be published in early 2020, following an extensive consultation period which will include scrutiny by the Assembly.

This post will focus on the PPW consultation. The Research Service will return to the draft NDF consultation once it has commenced. In the meantime, see our previous post which introduces the NDF.

The main driver for updating PPW has been a Welsh Government commitment to restructure planning policy in line with the Well-being of Future Generations (Wales) Act 2015.

The draft aims to fully incorporate the Act’s seven well-being goals and five ways of working into planning policy for the first time. The Cabinet Secretary for Energy, Planning and Rural Affairs, Lesley Griffiths AM, said that PPW had been ‘completely reworked’ to take account of the Act, when she launched the consultation in February 2018.

PPW’s new structure has therefore been based around the Well-being of Future Generations Act and placemaking. It introduces Five Key Planning Principles, and new National Placemaking Outcomes which describe what successful and sustainable places should be like.

Policy topics have been clustered around themes with the aim of making it easier to identify policy areas that are linked together. For example, the Active and Social Places chapter includes policy on housing, retail, community facilities, recreational space and transport. 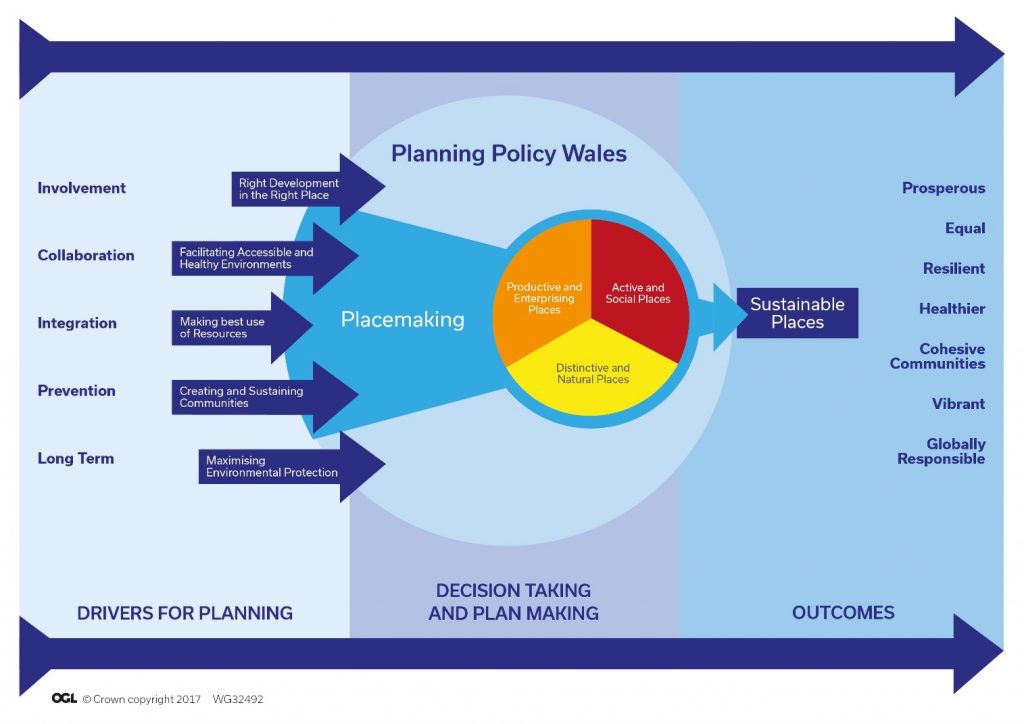 The Welsh Government has also taken the opportunity to update PPW in a number of areas including:

For example, the Economy, Infrastructure and Skills (EIS) Committee has heard how PPW should do more to promote the aims of the Active Travel (Wales) Act 2013.

The EIS Committee has also concluded that more needs to be done to support local planning authorities when planning for town centres and out-of-town retail parks, and has recommended that planning policy be reformed to support greater investment in digital connectivity. The Welsh Government’s response to these conclusions and recommendations can be seen in the above links.

The Climate Change, Environment and Rural Affairs (CCERA) Committee, in its work on the Draft Welsh National Marine Plan, has heard that there should be stronger links between terrestrial and marine planning policy.

One of the key messages from the CCERA Committee’s recent inquiry into Low Carbon Housing has been the need for planners to shift towards favouring low carbon design as a priority, and the need to adopt a holistic view in order to facilitate sustainable development.

Stakeholders and other interested parties are currently preparing their consultation responses, but some reaction is already beginning to emerge.

For example, consultancy firm Barton Willmore has published a detailed analysis of the draft PPW. Amongst other things, it welcomes the greater emphasis on collaboration between local planning authorities and points to the lack of progress on developing SDPs since the Planning (Wales) Act 2015 received Royal Assent almost three years ago.

In relation to this point, the Cabinet Secretary issued a written statement in December 2017 inviting local planning authorities to submit proposals for joint LDPs and, where appropriate, SDPs.

The Woodland Trust has expressed concern that the proposed new policy wording weakens protection for ancient woodlands. However, in response to a question on this issue during a CCERA Committee meeting, the Chief Planner said that while the words had changed the policy intent was still to protect ancient woodlands and ‘if people have concerns, we'll look again at the words’.

The PPW consultation runs until 18 May 2018, and can be found here: Planning Policy Wales: Edition 10