On Wednesday 7 February the Assembly will discuss a motion on Consultation on Assembly Reform in Plenary. The motion has been laid on behalf of the Assembly Commission by the Llywydd, Elin Jones AM. It states:

To propose that the National Assembly for Wales: 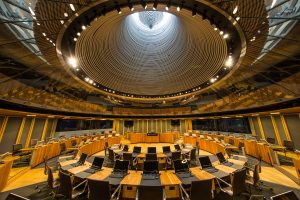 UKIP have also tabled a motion which states: To propose that the National Assembly for Wales:

The Wales Act 2017, amends the Government of Wales Act 2006, to confer competence on the Assembly over a range of its internal, organisational and operational arrangements. These include issues such as the rules on disqualification from membership of the Assembly, electoral administration, and the power to change its name. The Assembly Commission has looked at a range of issues relating to how the Assembly may use these new powers to reform which the Llywydd addressed in a statement in June 2017.

The Expert Panel on Assembly Electoral Reform was appointed by the Llywydd and Assembly Commission in February 2017, and tasked with:

It was asked to report by autumn 2017, and to make recommendations which could be implemented in time for the Assembly election in 2021. It was chaired by Professor Laura McAllister of Cardiff University. Its report, A Parliament that works for Wales, was published in December 2017.

The Panel’s report makes a compelling case for reform of the size of the Assembly to be made in time for the 2021 election, if this institution is to fulfil its scrutiny and representative functions on behalf of the people of Wales in these challenging political, economic and constitutional times.

I am clear that fundamental constitutional issues of this nature cannot be separated from the political realities of representative democracy in Wales. To deliver change, we need to build wide political consensus within this institution and outside. To this end, I have been working closely with all political parties represented in the Assembly and am grateful to them all for having engaged so positively and constructively. The Political Reference Group, which I chair, has been acting as a sounding board for the Expert Panel. Its advisory role will continue but this next phase of reform must also include much wider engagement, with all Assembly Members, with civic and political society and, above all, with the people of Wales. To that end, the Commission and I have agreed that, in early 2018, we will consult widely on how the Panel’s recommendations and the wider programme of reform should be taken forward

The National Assembly for Wales is planning improvements to its website, and is very interested in your views. Please take part in this Survey.