Reach for the stars: The Seren network and Welsh Oxbridge applications

Seren is a network of regional hubs designed to support Wales’ most able young people to achieve their academic potential and gain access to leading universities, including Oxford and Cambridge. This article follows the recent post about stretching potentially high achieving pupils in Wales.

In May 2013, Paul Murphy, the former Secretary of State for Wales, was appointed as the Welsh Government’s Oxbridge Ambassador, to identify the reasons why Welsh applications and admissions to Oxford and Cambridge Universities had declined.

The aims of the project were:

In June 2014, Paul Murphy presented the Final Report of the Oxbridge Ambassador for Wales to the then Minister for Education and Skills, Huw Lewis. The primary recommendation of the report was to establish:

a national network of partnership hubs … to ensure that schools and colleges can learn from each other, and share resources to support their most academically able students.

These hubs would ensure consistency in the support for the students with the greatest potential throughout Wales. Along with schools and colleges, Oxford and Cambridge Universities would be expected to contribute to the hubs. The Welsh Government accepted the recommendation and the Seren network was established in January 2015.

The report contained 15 other recommendations, including:

On 15th January 2015 , the first three pilot hubs were launched, which were then expanded throughout Wales. At the beginning of the academic year 2016/17, there were eleven hubs in Wales, supporting more than 2,000 students. Every eligible student in Wales now has access to a hub. 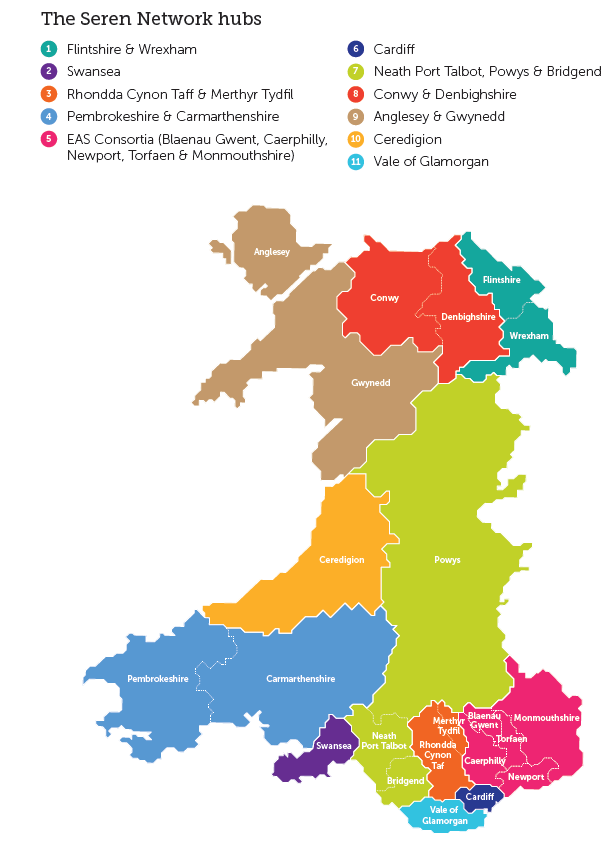 Each hub is a partnership of schools and Further Education colleges, supported by the Welsh Government and some of the UK’s leading universities, including Oxford, Cambridge, Russell group and Sutton Trust 30 universities. The institutions work together closely to develop a support programme for young people in their region, led by a hub co-ordinator. Students cannot apply directly to be part of the Seren Network, but are nominated by teachers, based on GCSE results. In March 2017, the Minister for Lifelong Learning and Skills announced a new collaboration between Jesus College, Oxford University and the Seren network. Jesus College will host a free summer school for students from Wales in August 2017, the first such programme aimed solely at Welsh students.

The Seren network aims to raise aspirations and provide support to students and teachers to ensure more able and talented young people achieve their potential and progress to the UK’s top universities. In order to do this, the programme seeks to:

The need to raise standards, amongst more able and talented pupils in particular, is a key aim of the Cabinet Secretary for Education’s policy initiatives. The OECD report Improving schools in Wales: An OECD Perspective (PDF 3.57 MB) (2014) identified a weakness in the Welsh education system: there is ‘a high and increasing proportion of low performers’ and ‘a low proportion of high performers.’ As our previous blog article explained, whilst the proportion of pupils achieving 5 or more A*-C grade GCSEs has increased, the proportion achieving 5 or more A* or A grades has fallen. This was illustrated by Wales’ 2015 PISA results which showed that performance at the higher levels of proficiency is lower than the OECD average and lower than other countries in the UK. The report recommended that more needs to be done to stretch more able and talented pupils. This problem was highlighted in the Oxbridge Ambassador’s Final Report:

[The] Welsh Government is currently focussed on increasing average levels of attainment in schools and colleges, with particular emphasis on literacy and numeracy. However, to ensure that schools and colleges prioritise support for their most academically able students, consideration must be given to recognising upper-end achievement externally, either through banding [school categorisation] or other performance measures.

The Cabinet Secretary told the discussion forum on The national mission of education reform – everybody’s business, hosted by Positif on 9 May 2017, that the Welsh Government was actively looking at a targeted scheme to stretch more able and talented pupils, involving the Seren Network. Kirsty Williams also referred to the success of the network in her statement on Post-compulsory Education and Training Consultation on 20th June:

Our Seren programme, for instance, gives us a really good example of what can be achieved.

As well as discussing the problem of low levels of high attainment in the Welsh education system, the Final Report of the Oxbridge Ambassador for Wales noted that Welsh students don’t do as well in the Oxbridge admission process, compared to other students in the UK. The document Welsh attainment and admission to Oxford and Cambridge: the evidence base: Extended executive summary, part of the Oxbridge Ambassador Project, suggested other possible factors that could merit further data collection and analysis. These could include: educational support, in terms of teaching, aspiration, subject availability and combinations, and UCAS references; personal preparedness in terms of revision, motivation and super-curricular exploration.

Cambridge University publishes annual admission statistics for undergraduate study, also including statistics by region. The table below shows that from 2013-16, applications from Welsh students represented 1.6% of applications made to the university. The percentage of offers made to Welsh students declined slightly from 2.0% in 2014 to 1.6% in 2016. The overall success rate increased from 19.6% in 2013 to 26% in 2014, but decreased to 20.7% in 2016.

This post is also available as a print-friendly PDF: Reach for the stars: The Seren network and Welsh Oxbridge applications (PDF, 356KB)