The Welsh third sector: an independent force or ‘just another branch of government’?

The jigsaw puzzle of funding for the Welsh third sector is complex: around 31% of its income comes from public funds, 21% from public giving, and 39% from trading and investments. This means that Welsh third sector bodies are reliant on a range of relationships with the public, with businesses and with national, regional and local governments to sustain its activities, many of which are delivering services for, or in the absence of, the public sector.

The sector is facing a number of challenges in the coming years, from decreasing public funding (including uncertainty about EU funds) and diversifying its funding base, to building public trust in the wake of high profile scandals and managing effective relationships with different governments with different approaches to regulation, lobbying and grant giving.

But how has public sector austerity and increased control of public funding affected the sector? Is public scrutiny being stifled by financial dependence? And how will the sector be financially sustainable in the years to come?

What’s the difference between ‘civil society’ and the ‘third sector’? 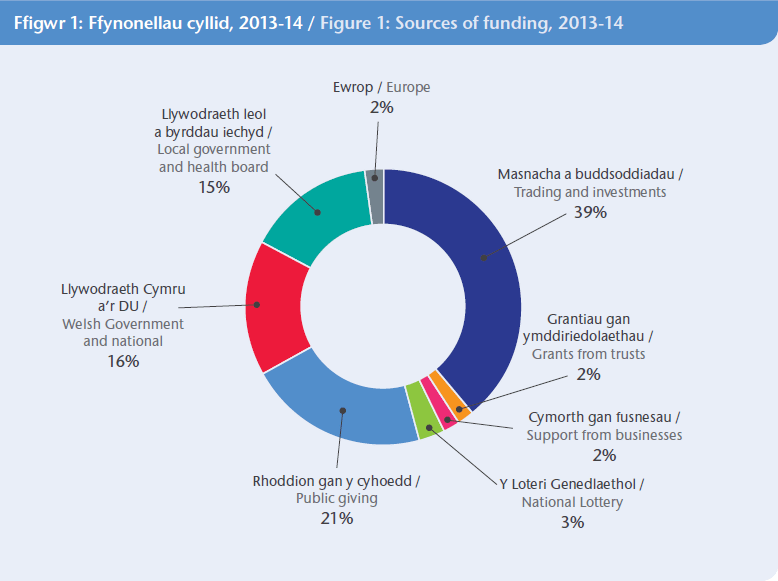 The freedom of association is a fundamental human right. It is the freedom to form or join groups to protect interests, advance beliefs, and improve communities.

The term ‘civil society’ encompasses almost all forms of organised social activity independent of government control: from charities to trade unions, and political parties to professional organisations. But the more commonly used, narrower term, is ‘third sector’, which includes charities and social enterprises, but excludes other civil society organisations such as trade unions.

The First Minister stated in March 2016 (PDF 224KB) that “some organisations are [..] more reliant on government support than others and [..] our present level of funding is unlikely to be sustainable going forward.” To help organisations replace this funding, he said that “the Welsh Government is supporting work to improve fundraising skills in the sector.”

In 2014, the Welsh Government refreshed its third sector scheme and code of practice for funding (PDF 270KB), and it increasingly uses procured contracts to distribute funding, rather than grants.

Local government funding for the third sector in Wales has risen significantly in the past decade. But the Wales Audit Office (WAO) recently found (PDF 1.54MB) that local authorities mostly “do not have an effective strategic approach to working with the third sector, and inconsistencies in funding arrangements make it difficult to demonstrate value for money”.

Around 67% of third sector income in Wales comes from non-public sources such as public giving, trading and investment, the National Lottery and support from businesses. Following a number high-profile incidents in 2015 (including the targeting of vulnerable people by private fundraising companies), the UK Government commissioned a formal review of fundraising. The review (PDF 620KB) recommended a range of changes to fundraising regulation in England and Wales (which were all accepted by the UK Government at the time), including: the introduction of a new regulator, a more effective sanctions regime and the creation of a fundraising preference service. In response, the Charities (Protection and Social Investment) Act 2016 was passed in March 2016, which has been called “one last chance at making self-regulation work, [by introducing a] ‘statutory backstop’”.

There have been a number high profile cases of financial mismanagement in Welsh charities in recent years, including:

There have been concerns that Welsh civil society organisations are reluctant to criticise the Welsh Government for fear of losing funding. The Bevan Foundation argued that:

But in the Welsh Government’s most recent annual report on the third sector (PDF 599KB) (2015-16) the WCVA’s CEO Ruth Marks acknowledges this concern, stating that:

[The third sector and the Welsh Government] will not always agree and [we] do not seek to create a relationship that is seen as “cosy” but one where challenge, by both partners, is a sign of health in an open, transparent society.

The Fourth Assembly’s Committee for the Scrutiny of the First Minister wrote to the First Minister in March 2016, stating that it “believes that it is extremely important that third sector bodies should feel free to act as independent critical voices in civic society”. It voiced concerns about how the Welsh Government was helping the third sector in Wales diversify its funding base. In March 2014, the Committee asked for reassurance that the third sector was “not just another branch of government”.

During the Fourth Assembly’s Communities Committee inquiry into poverty, former Plaid Cymru AM Jocelyn Davies asked the organisation Chwarae Teg to state on the record that they were funded by the Welsh Government. (Senedd TV).

Referring to this moment, the lobbyist Daran Hill pointed out that “there is a relationship of co-dependency between many parts of the third sector and the Welsh Government. It sometimes feels that whole swathes of the sector have been almost nationalised and therefore, in effect, muzzled.”

This sentiment was echoed by another Institute of Welsh Affairs article, in which Dr Rebecca Rumbul argued that “civil society in Wales has undergone a contraction in its plurality [..] exacerbated by the funding regimes put in place by the Welsh Government and its EU funding body WEFO, in which high value and high volume requirements for service providers squeeze out smaller organisations from receiving a share of the funding.”

The UK Government’s approach is different. In February 2016, it proposed the introduction of a new clause into all new and renewed grant agreements, which would have prevented organisations receiving UK Government grants from using these funds to lobby the UK Government or Parliament. But in April 2016 following widespread criticism that the clause would threaten independence, the Government put the proposal ‘on pause’.

In contrast, the Welsh Government responded to this proposal by stating that it “[would] continue to safeguard the ability of Welsh third sector organisations to engage in constructive dialogue to support policy making”, and that it “believe[s] the current standard terms and conditions effectively and comprehensively ensure public money is used for approved purposes”.

There have also been calls to establish a Welsh register of lobbyists to increase transparency, similar to other parliaments. In 2013 the Assembly's Standards Committee called for the lobbying industry to face tighter scrutiny but not a full register. The Assembly’s current Standards Committee is now also undertaking an inquiry into lobbying in Wales.

The future of Welsh civil society is being explored in depth by the Wales Institute of Social & Economic Research, Data & Methods (WISERD) in a five-year programme of research. The Bevan Foundation is also undertaking a piece of work on the future of ‘doing good’ in Wales.

This post is also available as a print-friendly PDF: The Welsh third sector: an independent force or ‘just another branch of government’? (PDF, 276KB)

The cost to life: how soaring living costs affect people's health and wellbeing