Solar farms, or solar parks, are the large-scale application of Solar Photovoltaic (PV) installations used to generate electricity which is fed into the local electricity grid. They often cover large areas of land (between 1 and 100 acres) and therefore are normally developed in rural locations. Data from DECC show that the average capacity of solar farms operational in Wales is approximately 8 megawatts (MW). To give a sense of scale around 10 ha of land is required for every 5 MW of installation, enough to power 1,515 homes.[1] The sector has seen strong growth in Wales since 2011 when Pembrokeshire became the first council in Wales to grant planning permission for a solar farm at Rhos-y-Gilwen Mansion. Data from DECC’s Renewable Energy Planning Database (REPD), show that from 2011-2015 there have been 23 solar farms made operational in Wales, totalling 198.6 MW of installed capacity (Table 1). [caption id="attachment_3523" align="alignnone" width="300"] 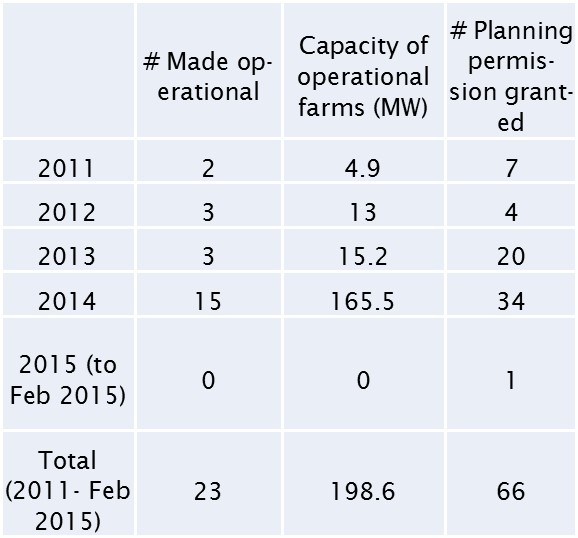 Table 1. Solar PV deployment in Wales. Source REPD.[/caption] [1] Based on average annual consumption figures for a house of 3,300 kWh of electricity. This increase in development is partly due to support from government funding streams including small-scale Feed-in Tariffs (FIT) (<5MW), the Renewable Obligation (RO) Scheme (>5MW) and Common Agricultural Policy funding for farmers. Therefore it has been an economical option for landowners to develop solar farms instead of crops. Costs of the solar panels have also decreased rapidly as a result of global development and deployment in large markets like Germany and China. Indeed, the price of PV panels dropped by 50% between 2010 and 2012. The increase in solar farms has also been driven by concerns that the electrical grid has limited capacity for renewable energy and so there has been a recent race to guarantee grid connection. The map highlights the distribution of solar farms in Wales that are operational, under construction or have planning permission in February 2015. It can be seen that many applications for solar farm development have been focussed in South Wales; one reason for this is due to the relatively high radiation levels found there. The unexpected rate of growth in the industry has triggered concerns relating to the loss of land for agricultural production and an increase in household energy bills which the subsidies are levied from. Following these concerns the UK Government has reduced, and in some cases stopped, subsidies in efforts to moderate the rate of installation with preference instead for rooftop installations. The RO will close to large-scale (>5 MW) solar PV from 1 April 2015. Furthermore, from 2015 solar parks are no longer eligible for the Basic Payment Scheme (BPS) of the Common Agricultural Policy as the predominant activity on the land is not agricultural. Funding will still be available for smaller-scale (<5MW) installations through the FITs. For further information on solar farms in Wales see the Research Service’s 2015 Research Note.