On 2 October, the Assembly’s Presiding Officer launched a web portal as part of the Women in Public Life campaign to increase women’s participation in public life in Wales. The Women in Public Life campaign The campaign started in 2012 with a series of seminars across Wales. Following on from an examination of the barriers to increasing women’s representation as outlined in the Who Runs Wales 2012 report by the EHRC, panels of influential women from different sectors were engaged in discussions looking at practical solutions for enhancing women’s representations in various areas of public life. [caption id="attachment_793" align="alignright" width="300"] 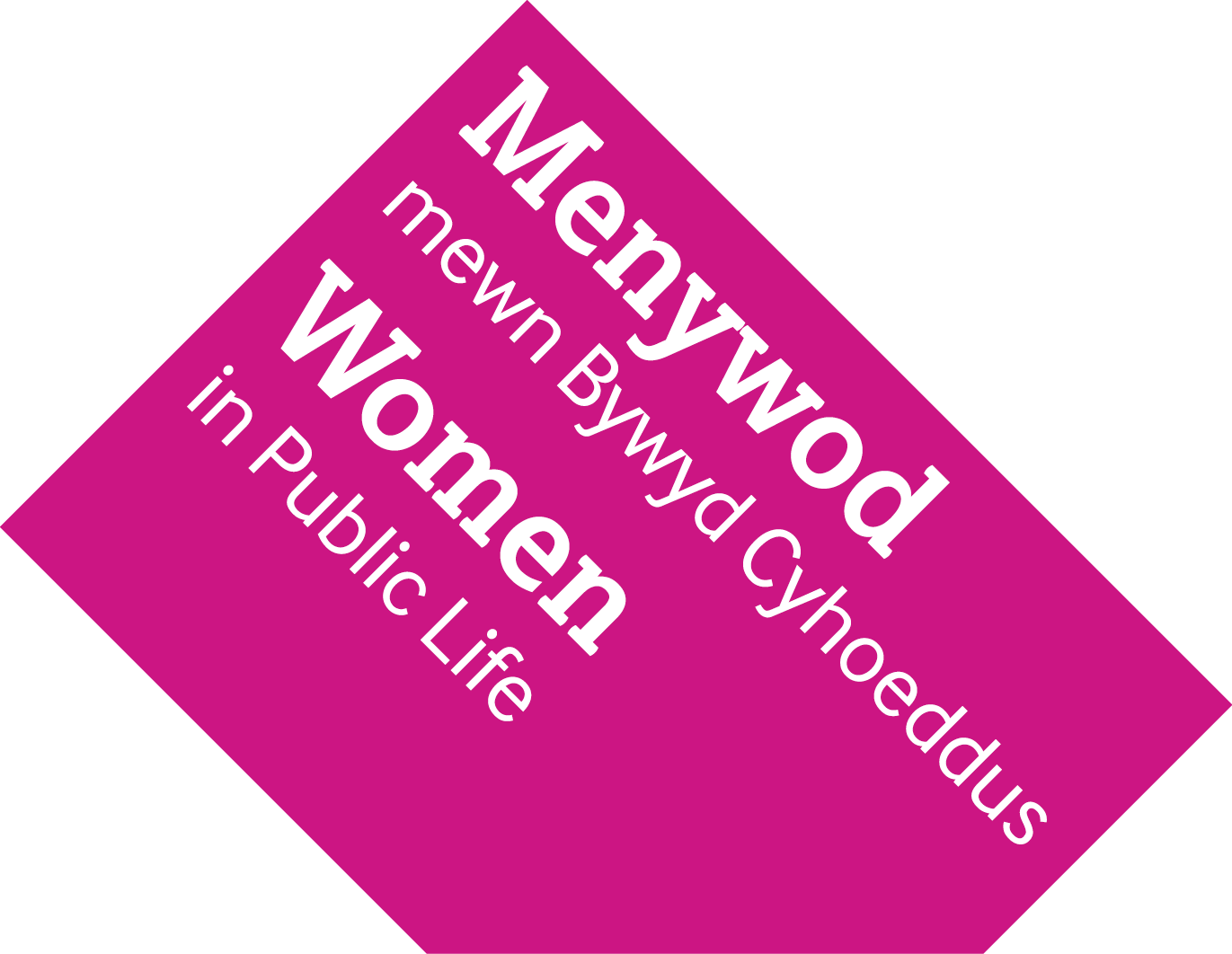 Source: POWiPL[/caption]    Key findings from the individual seminars informed the content for a national conference where panels of experts and guest speakers were invited to offer practical solutions for enhancing the representation of women in public life. As an outcome of the conference, the Presiding Officer wrote to Party Leaders asking their parties to consider steps to ensure more women stand for election in 2016. The Presiding Officer has also launched: a series of lectures profiling eminent role models in traditionally male-dominated spheres; a web portal which will contain details of public appointments in Wales, as well as opportunities for appropriate training and a mentoring scheme aimed at women. Women’s political representation

National Assembly for Wales The use of special measures by some political parties to encourage women candidates to stand and thereby drive up the numbers of female representatives has been central to achieving the high degree of gender balance in the Assembly since devolution. However, since the achievement of gender parity in the 2003 elections, the level of female representation has been in decline. Figure 1: Percentage of women representatives, by parliament [caption id="attachment_794" align="aligncenter" width="300"] 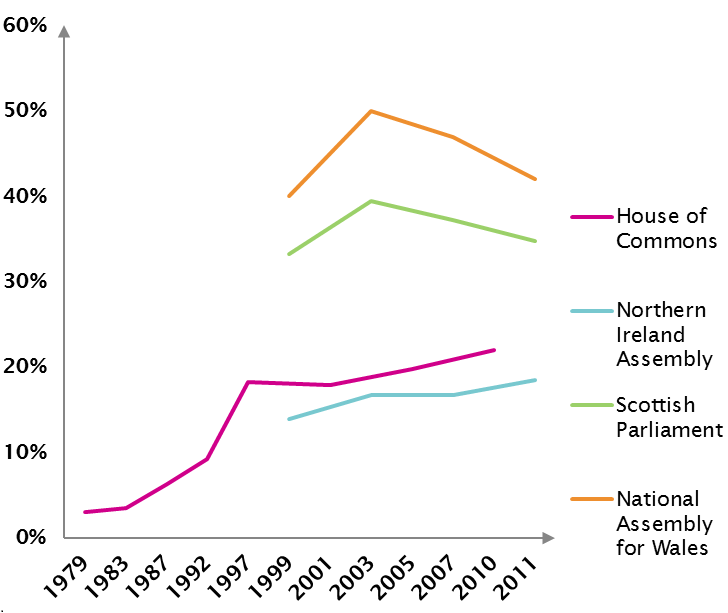 Sources: National Assembly for Wales, House of Commons Library[/caption] The 2011 Assembly elections saw a lower number of women Members elected than in the previous two Assemblies. This drop in numbers can be attributed to a combination of factors including a move away from the use of measures to promote female candidates and the retirement of some of the first generation of post-devolution elected women representatives. If the Assembly was counted as a separate parliament in the Inter-Parliamentary Union’s (IPU) rankings of parliaments with the highest percentages of women representatives, Wales would now be 9th in the world (out of 187 countries). Westminster In contrast to the strong degree of female political representation achieved in the Assembly, the proportion of women parliamentarians in Westminster is much lower. Currently just over one in five Members of Parliament are women- this is the highest number and proportion of female MPs ever. Prior to 1987 women had never accounted for more than 5 per cent of MPs. The 2010 election saw the highest number of women elected as MPs in the UK overall. Of the 650 MPs elected in 2010, 143 seats in Westminster (22 per cent of the total) were won by women. Currently, 18 per cent of Welsh MPs are women (seven MPs). In the House of Lords, 181 peers (22 per cent) are currently women. Local authorities 26 per cent of the councillors in Wales are women, and the three local authorities with the highest proportion of female councillors are Swansea, Cardiff, and Rhondda Cynon Taf. Figure 2: Percentage of women councillors by local authority, 2012* [caption id="attachment_795" align="aligncenter" width="563"] 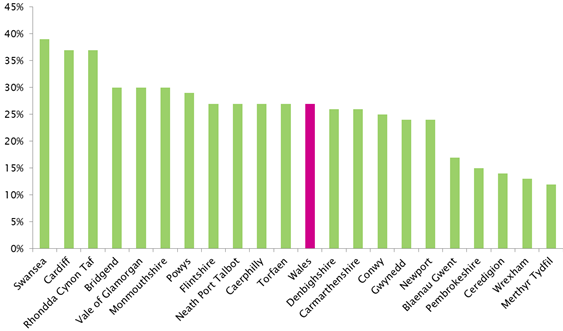 * Does not include Anglesey election in 2013, but includes by-election for Bryncrug / Llanfihangel in Gwynedd in 2012.
Source: Local authority websites[/caption] Article by Hannah Johnson